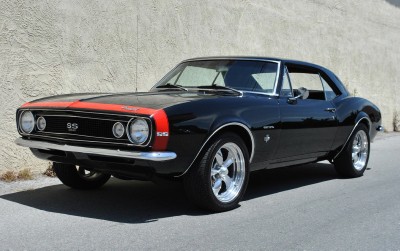 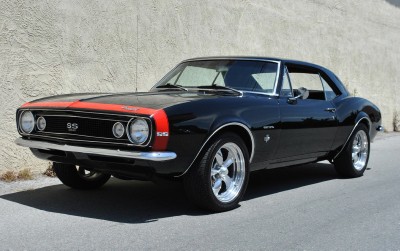 This stunning black on black 67Camaro has already been turning heads and it hasnt been in our showroom even a week.If you are searching for a resto-mod Camaro that has been tastefully upgraded without taking away from the cars soul, then you may have found your match.

It has had numerous performance and cosmetic upgrades to it.It currently sports a 350 crate motor which has been bored out .04 over with World Product angle heads, solid lifters, Edelbrock Victor Jr. intake and Edelbrock 750 carburetor. The transmission is none other than a Muncie 4 speed.

As if that was not enough, thecurrent owner overhauled the entire suspension to the tune of over $6000! He also replaced the rear differential with an Eaton Posi unit sporting 3.42 gears.During his 5 years of ownership, the cylinder heads have been rebuilt, gaskets replaced, camshaft replaced along with the lifters.

On the cosmetic side, it sports 17 Torque Thrust rims and Nitto high performance tires.Dont forget the gorgeous red nose stripe that really adds to the aggressive look of the car. As you can see this 67 is ready to go and has the brawn to keep you smiling for years to come.Dont hesitate to drop us an e-mail or phone call to learn more or schedule a visit to our showroom.

The Chevrolet Camaro was introduced in 1967 as a compact car specifically built to provide competition for the highly popular Ford Mustang. This pony car was built atop of the same F-Body platform as the Pontiac Firebird, which had a similar production lifespan of 1967 through 2002.

During the preproduction stages of the Chevrolet Camaro, General Motors codenamed the vehicle 'Panther'. The name 'Camaro' was decided upon before production began. The word 'Camaro' in French is slang for 'friend' but in pony-car slang, the name means 'Mustang killer'.