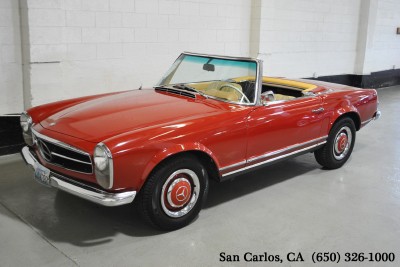 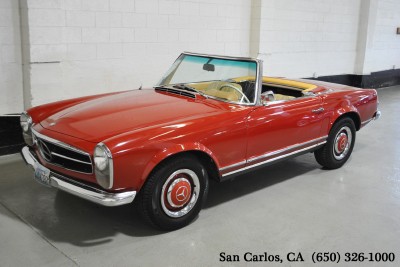 The current owner of this 230SL is finally parting with it after having enjoyed it for the last 22 years. A classic 4 speed roadster, this 230SL drives as strong and smooth as it looks. The bright red paint was just recently rebuffed and clear coated back to its original luster.

This is an older restoration that still looks and runs great. In the last 12 years, the engine, suspension, and drivetrain were rebuilt appx. 15,000 miles ago. We have many receipts on this car from the last 20 years for you to look through as well so you can see that this was a 230SL that was cared for.

_By 1955, Mercedes-Benz Chief Engineer Prof. Fritz Nallinger and his team held no illusions regarding the 190SL's lack of performance, while the high price tag of the legendary 300SL kept it elusive for all but the most wealthy buyers. Thus Mercedes-Benz started evolving the 190SL on a new platform, model code W127, with a fuel-injected 2.2 liter M180 inline six engine, internally badged as 220SL. Encouraged by positive test results, Nallinger proposed that the 220SL be placed in the Mercedes-Benz program, with production commencing in July 1957.

However, while technical difficulties kept postponing the production start of the W127, the emerging new S-Class W112 platform introduced novel body manufacturing technology altogether. So in 1960, Nallinger eventually proposed to develop a completely new 220SL design, based on technology from the W112. This led to the W113 platform, with an improved fuel-injected 2.3 liter M127 inline-six engine and the distinctive "pagoda" hardtop roof, which was badged as 230SL.

The new 230SL made a remarkable debut at the prestigious Geneva Motor Show in March 1963, where Nallinger introduced it as follows: "It was our aim to create a very safe and fast sports car with high performance, which despite its sports characteristics, provides a very high degree of traveling comfort." Of the 19,800 230SLs built from 1963 - 1967, just over 4,700 came here to the US. The model became quite popular and most of the subsequent cars sported an automatic transmission due to driving preferences here in the US._