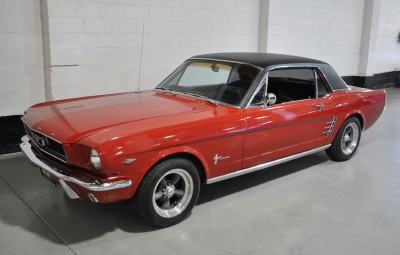 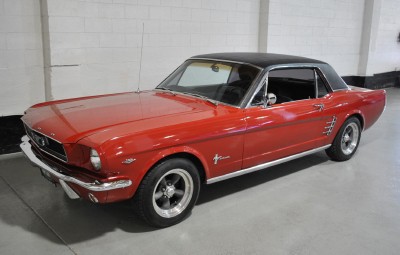 Theres no doubt that 1966 is one of the most popular Ford Mustang model years in the history of the car. In fact, March 1966 marked the creation of the millionth Mustang.

Advertisements became popular reminders of the Mustangs youthful spirit, such as one featuring two mature adults sitting in a new Mustang with the words, Youth is a wonderful thing. What a crime to waste it on children. It was the car to have it you were seeking the fountain of youth. It was the car to have if you were looking to win over your neighbor or hit the road for fun and adventure.

In all, there were minimal changes to the Mustang in 1966. Production began in August of 1965 and featured a line up of: Coupe, Convertible, and Fastback. In all, Ford produced 607,568 total Mustangs in 1966. The car sported additional new colors, a redesigned grille, new instrument cluster, and new styled wheels. An automatic transmission became available for the Hi-Po V-8. Side scoops featured chrome trim with three wind-splits, and GT models received a new gas cap and driving lamps as standard equipment.

This Mustang began its life as a C code car with the 289 motor.It has since been upgraded to a 302 motor and at the time the motor went in, the owner opted to have air installed as well.The motor was installed and serviced by Spiteris Auto Services right here on the peninsula.The front disc brakes and booster were also replaced recently making this car completely turn-key and ready for you to enjoy.

The paint and vinyl top are in above average condition , however no work is urgently needed.This is not your trailer queen mustang but a solid and dependable driver with many modern upgrades for improved drivability on todays roads.

Give us a call or e-mail to learn more or set up a time to visit our showroom.

Please note that because the amount you offered was below the full Asking Price of $14,990, this offer will be considered but it is NOT guaranteed to be accepted, nor will it take precedence over other offers and you risk losing your opportunity to purchase this vehicle.