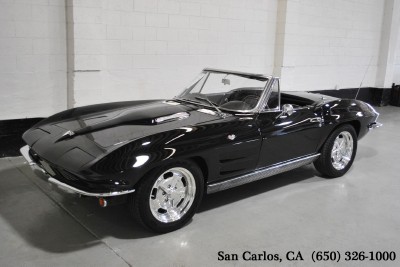 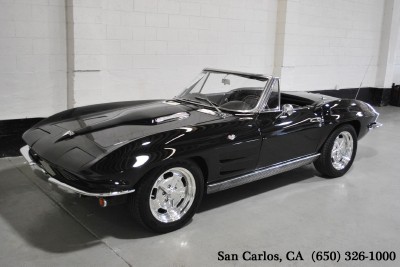 This Black on Black C2 comes to us from its 3 owner who just finished rebuilding the numbers-matching 340 hp 327 C.I. V8 motor.This was a St. Louis build original black on black vinyl interior car as shown on the trim tag.Build date was 4 week of October, 1962, making it a very early production example.

The overall condition of this car is consistent throughout and the would make a great, very driveable addition to your collection. The black paint is still quite glossy with a few minor blemishes.The interior shows great and is well-maintained.A modern CD changer is discreetly installed in the glovebox so as to keep the stock look of the cockpit.

Under the direction of Bill Mitchell, the new Corvette was penned by Larry Shinoda. It was based on Bill Mitchell's 1959 Stingray racer and the 1961 Mako Shark. Revealed to the world on June 1962, two models - a coupe and a convertible - were introduced. Both were a radical departure from anything sold to the public at the time. They were lower (almost three inches) narrower (3 inches) and shorter by two inches than the previous generation. Their sleekness was indisputable. If you compare it to the other domestic offerings, it is easy to understand the impact it had. Wherever their owners took them, racetrack, boulevard or rally, the new Corvette looked like it belonged. Considerthe era and you will see how radically different this car was to what was sitting in the showrooms of the day.

Amazingly enough, the one thing that didn't change in 1963 was the engine selection, which was the same as 1962. Right: The 327 cubic inch fuel injected mill continued as the top performer with 360 hp, well beyond the one hp / cubic inch milestone. The air cleaner and Plenum chamber (affectionately known as "the doghouse") were updated.

Like the body and the chassis, the interior was all new for 1963 and it was also a radical change. Aeronautics was in fashion at the time, so the inside of the new Corvette had a basis in airplane cockpits. There was a strong separation between the driver and the passenger. It was both good looking and easy to use. Right: The passenger "grab bar" was carried over from the C1 Corvettes and considering the performance increase, was needed more than ever.

Please contact us anytime with questions or to schedule a visit to our showroom.

Please note that because the amount you offered was below the full Asking Price of $46,990, this offer will be considered but it is NOT guaranteed to be accepted, nor will it take precedence over other offers and you risk losing your opportunity to purchase this vehicle.