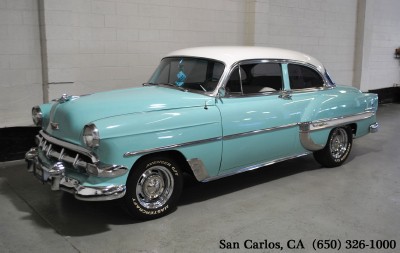 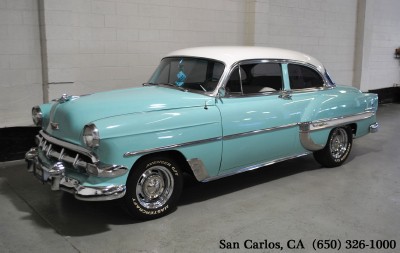 In the 1953 model year, instead of being merely a trim level, the Bel Air finally became its own model line.This top of the line series would be considered the crown jewel of Chevys offerings.

The 1954 Chevrolet Bel Air came stock with a "Blue Flame" in-line straight six-cylinder engine made of cast iron, which was Chevrolet's most powerful engine at the time. With a 235.5 cubic-inch displacement, the engine delivered 115 horsepower at 3,700 rpm.

While the 55s and 57s get all of the press, the 1954 Bel Airs have a different type charm about them.This was about the time that two tone paint schemes were becoming trendy and many collectors tend to prefer the subtle body lines of the 1953 and 1954 models.Especially because the 54s can be had for very reasonable prices.

Painted in surf green/white two tone, this 1954 Bel Air looks like it stepped right out of the 50s.It has had only 3 owners since 1954, both of them local.In fact, the car was originally purchased just across the Bay in San Leandro, CA.

Under the hood, youll find the original 235 inline-6 motor which was rebuilt by the previous owner. The body is straight and the paint is still in great shape.Opening the doors reveals an interior that perfectly matches the condition of the exterior.

This Bel Air is the perfect car for someone who wants a classic boulevard cruiser at a reasonable price.Please give us a call/email to learn more or schedule a visit to our San Carlos showroom.

Please note that because the amount you offered was below the full Asking Price of $17,995, this offer will be considered but it is NOT guaranteed to be accepted, nor will it take precedence over other offers and you risk losing your opportunity to purchase this vehicle.