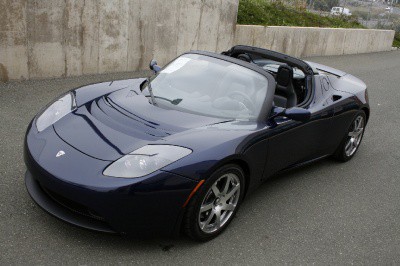 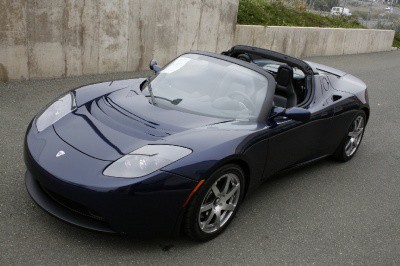 2008 Tesla Roadster. Finished in Blue over Black interior. The Roadster was developed by Tesla Motors with design help from Lotus Cars in certain areas. Lotus supplied the basic chassis development technology from its Lotus Elise, with which the Tesla engineers designed a new chassis. Barney Hatt at Lotus\'s design studio developed the styling with input from Tesla. Tesla\'s designers chose to construct the body panels using resin transfer molded carbon fiber composite to minimize weight; this choice makes the Roadster one of the least expensive cars with an entirely carbon fiber skin. Power is supplied from a 3-phase, 4-pole AC electric motor, producing a maximum net power of 248 hp. Maximum torque is 200 ft-lb, obtained at 0 rpm and almost constant up to 6,000 rpm, a common feature of electric motors and one of the biggest differences with internal combustion engines. Transmission is a direct drive BorgWarner unit. Power is stored in lithium-ion batteries creating a potential range of 244 miles on a single charge while 0-60 acceleration is achieved in just 3.9 seconds. The Roadster\'s efficiency, as of September 2008, was reported at 120mpg using a standard conversion equation. A full recharge of the battery system requires 3 hours using the high power connector.

The Tesla Roadster is the upcoming Electric Sports Car: 0-60 mph in under 4 seconds, 200 mile range, and NO gasoline involved.

From the Tesla site: When you build a car that\'s electric, you start with one built-in advantage: Electric cars just don\'t have to be as complex mechanically as the car you\'re probably driving now. Sophisticated electronics and software take the place of the pounds and pounds of machinery required to introduce a spark and ignite the fuel that powers an internal combustion engine.

For example, the typical four-cylinder engine of a conventional car comprises over a hundred moving parts. By comparison, the motor of the Tesla Roadster has just one: the rotor. So there\'s less weight to drive around and fewer parts that could break or wear down over time.

But the comparison doesn\'t end with the counting of moving parts. The engine and transmission of a conventional car also need lubricating oils, filters, coolant, clutches, spark plugs and wires, a PCV valve, oxygen sensors, a timing belt, a fan belt, a water pump and hoses, a catalytic converter, and a muffler all items requiring service, and all items that aren\'t needed in an electric car.

The Tesla Roadster\'s elegantly designed powertrain consists of just the four main components. Mind you, these aren\'t \"off-the-shelf\" components, and each includes innovations, both small and large. But when you build a car from the ground up, you have the luxury of questioning every assumption and to distill as you reinvent.

Please note that because the amount you offered was below the full Asking Price of $97,990, this offer will be considered but it is NOT guaranteed to be accepted, nor will it take precedence over other offers and you risk losing your opportunity to purchase this vehicle.