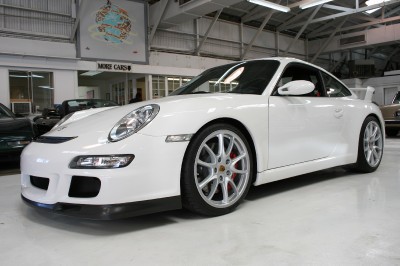 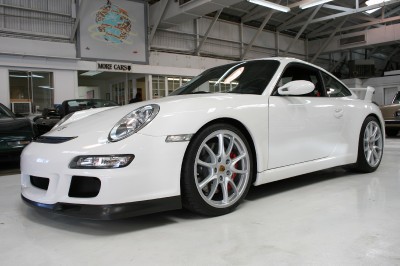 At first glance, the GT3 is distinguished from a standard 911 through its lower ride height, a prominent double deck rear spoiler and an air dam which practically kisses the ground. This latter feature cools the radiator via three large air intake ducts.

In the 911 model range, the abbreviation GT3 stands for pure, unadulterated driving pleasure. With its uncompromising dynamics, this model impresses not only in normal day-to-day driving but also on the racetrack. The 305-kW (415-bhp) 3.6-liter flat-six engine produces a specific output of 84.7 Kilowatts (115.3 bhp) per liter of displacement. This performance places the new-generation GT3 in its displacement class at the pinnacle of road-legal production sports cars with naturally aspirated engines.

It uses the same 3.6-liter flat-six as the standard Carrera, but larger throttle bodies and a freer-flowing exhaust allow it to send up to 409 horsepower and 298 pound-feet of torque to the rear wheels through a six-speed manual transmission and a variable limited-slip differential. And they arent just any wheels, they measure 19 inches in diameter and come wrapped in 305/30 rubber.

Underneath the big rims are brake rotors over 13 inches in diameter, front and rear, with six-piston calipers in front, four-piston binders in back. Porsches ceramic composite brakes are available as a big-ticket option for serious weekend racers.

There are substantial suspension upgrades as well. This is the first GT3 model to use Porsches Active Suspension Management (PASM), a system that allows for two driver-adjustable levels of sport. Hitting the dash button varies the throttle sensitivity, damper settings, brake calibrations, and stability control systems. On the standard 911, it goes from comfortable to firm. On the GT3, it goes from firm to mouthpiece-required stiff.

You can opt for a set of factory-approved, carbon-fiber racing seats which are half the weight of the standard buckets if the standard setups claimed 4.3-second 0-to-60 time and 192 mph top speed arent fast enough for you. Alcantara trim covers most of the interior, and that too can be changed of course. All will be in addition to the $106,000 base price. Deliveries start in August.

The six-cylinder engine reaches its nominal output at 7,600 rpm. At 8,400 rpm, the engine speed limit again lies 200 revolutions higher than for the previous model. This makes it a world leader in its engine-size class. In addition to this high engine speed concept, the optimized airflow rate considerably improves performance. This is made possible by the variable intake system with a throttle valve enlarged from 76 to 82 millimeters, the optimized cylinder heads and an exhaust system with low back pressure.

The driver has a revised six-speed transmission at his disposal. It impresses with its very short gear lever travel and, thanks to the lower ratios of gears 2 to 6, ideally complements the racy engine.

New for the GT3 is a change-up display, which lights up on the rev counter shortly before the relevant engine speed is reached. It provides an additional signal at the best time to change gear. The measured values prove just how well the engine and gearbox are harmonized: the GT3 accelerates from 0 to 160 mph in 4.3 seconds, and reaches 160 km/h from a standing start in 8.7 seconds. Its top speed is 186 mph.

The new 911 GT3 boasts an active chassis for the first time. Porsche Active Suspension Management (PASM) offers two sporty chassis in one: the basic configuration is largely similar to that of the previous model and is suitable for driving on alternating road surfaces. In sport mode, the system switches to harder damping, thereby enabling even better dynamism on the racetrack.

For the best-possible transmission of engine power to the road, the GT3 is equipped with a comprehensive traction package, which includes not only the standard-equipment 19-inch sports tires but also a mechanical limited slip differential. In addition, the new electronic Traction Control adapted from the Carrera GT high-performance sports car ensures safe traction under any driving conditions. It features traction-slip and drag-torque control functions, and can be switched off completely if required.