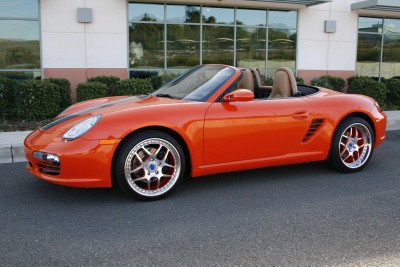 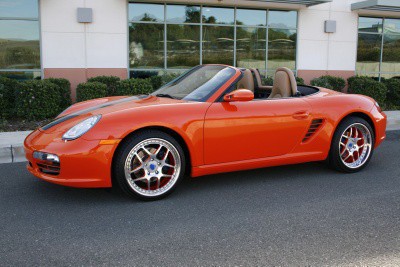 Located in our Fairfield Showroom. Contact us at or 888-527-6323.This amazingly sharp "Oh So Orange" Pearl Boxster features an after-market Euro Sport Exhaust, Custom Paint, Custom 20" Rims, Navigation and is iPod ready! All the windows have a 30% tint, including the legal front windshield, which really cools down the car in the summer. This one-owner car has been meticulously maintained and serviced, and the custom paint job (valued at more than $15,000) has to be seen to be believed...it is a true head-turner and makes this very special Boxster a one-of-a-kind car. Among many of its features is the fact that it is still under warranty until Aug 4th 2012 or 100K miles, giving you additional peace of mind.

The Porsche Boxster is a mid-engined roadster, and is the manufactuer's first road vehicle since the 550 Spyder that was originally designed as a roadster. In 2005, Porsche unveiled the new generation of Boxsters: the type 987. The 987 is more powerful than its predecessor and featured styling inspired by the Carrera GT.

The second generation of the Boxster (internally known as the 987) made its debut at the 2004 Paris Motor Show alongside the new 911 (997), and the newly updated version became available for model year 2005.

In appearance the car remains very similar to the previous generation. The most obvious styling change is to the headlights, which now have a profile similar to those of the Carrera GT, Porsche's mid-engined supercar. The intake vents on the sides of the Boxster are now larger, with more pronounced horizontal slats and are coloured metallic silver, irrespective of the paint colour on the rest of the car. The most significant updates from the 986 series are in the interior, with a more prominent circular theme evident in the instrument cluster and cooling vents. Porsche claims that the 987 Boxster shares only 20% of its components with its predecessor, despite their being almost identical from the outside. The base engine is a 2.7 L 176 kW (240 hp) flat-6, with the Boxster S, like our car, getting a 3.2 L 206 kW (280 hp) engine. The very popular and hard-to-find Cayman series is actually derived from the 987.

Please note that because the amount you offered was below the full Asking Price of $27,995, this offer will be considered but it is NOT guaranteed to be accepted, nor will it take precedence over other offers and you risk losing your opportunity to purchase this vehicle.