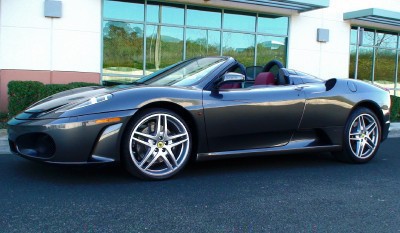 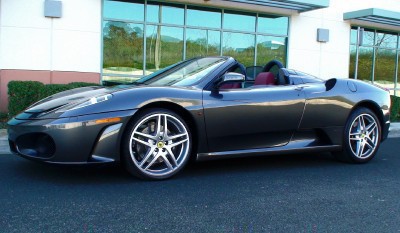 Along with a restyled body, the F430 features a 4.3L V8 petrol engine. This new powerplant is a significant departure for the F430\'s line: the engines of all previous V8 Ferraris were descendants of the Dino racing program of the 1950s. This fifty year development cycle comes to an end with the entirely new 4.3L, the architecture of which is expected to replace the Dino-derived V12 in most other Ferrari cars. The engine\'s output specifications are: 360.4kW (483hp) at 8500rpm and 465Nm (343lbft) of torque at 5250rpm. The F430 will reach a top speed of 197mph

The brakes on the F430 were designed in close collaboration with BremboThe result has been a new cast-iron alloy for the discs. The new alloy includes molybdenum which has better heat dissipation performance. Another option Ferrari is providing are Carbon fibre-reinforced Silicon Carbide (C/SiC) ceramic composite discs. Ceramics have much higher resistance to heat and brake fade than metals, the F430\'s brakes offer not only good performance but also a longer lifespan. Ferrari claims the brakes will not fade even after 300-360 laps at their test track.

Top Gear\'s Jeremy Clarkson has commented on the F430\'s handling being absolutely brilliant, a marked improvement over the 360; he claimed that the Ferrari holds the road so well that \"even the most butter-fingered, incapable driver could drive the F430 around their test track only one second slower than the most skilled test driver\". He has in fact proclaimed, on more than one occasion, that the Ferrari F430 is \"just about the best car I\'ve ever driven\", a status he previously attributed to the F355 (but never the 360).

Please note that because the amount you offered was below the full Asking Price of $179,990, this offer will be considered but it is NOT guaranteed to be accepted, nor will it take precedence over other offers and you risk losing your opportunity to purchase this vehicle.