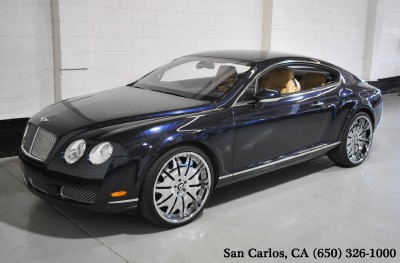 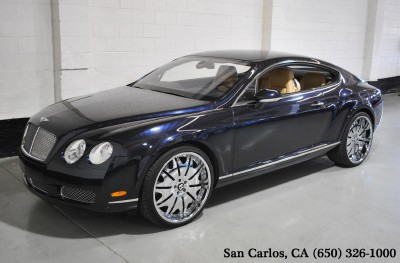 Introduced first in concept form, the Continental GT coupe debuted as a production model at the 2003 Geneva Motor Show. Sales in Europe began later that year, and the U.S. version started reaching dealerships during 2004.

According to Bentley, the Continental GT was "conceived to be a sporting coupe without rival." Striking in design, it's a full four-seater with four-wheel drive. Breathing with the assistance of twin turbochargers, its compact 552-horsepower W-12 engine drives a paddle-operated six-speed sequential automatic gearbox that promises supercar performance. Bentley claims the Continental GT can accelerate from zero to 60 mph in 4.7 seconds.

Continental GT appearance is far removed from the subtly sporty designs of Bentley's recent seasons, which were comparatively sedate. Designers sought to blend traditional Bentley hallmarks and hand craftsmanship with a contemporary profile and advanced technology. Featuring pillarless hardtop styling, the Continental GT coupe has a minimal front overhang and pronounced haunches over the wheels.

This particular Continental comes to us from a local owner who is moving out of the country and sadly can't take it with him.The odometer reads just over 17,000 miles and the car was serviced and maintained as you would expect for a car like this.The last major service (15k miles) was performed in June of 2010.The car comes equipped with 22'' Vellano VSD Chrome rims.

The leather and interior is still in excellent shape and it is evident that this was an adult-owned car.The light birdseye maple adds a gorgeous contrast to the deep navy leather accents throughout the cabin.
Come take a look for yourself.This is an excellent chance to pick up a pre-owned Bentley for less than of what it cost new.

Please note that because the amount you offered was below the full Asking Price of $82,990, this offer will be considered but it is NOT guaranteed to be accepted, nor will it take precedence over other offers and you risk losing your opportunity to purchase this vehicle.