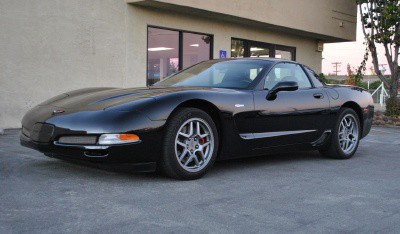 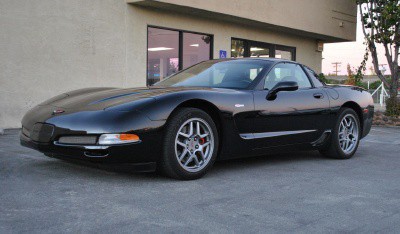 It is becoming more and more difficult to find a unaltered, completely stock C5 Corvette, let alone a Z06 as nice as this particular vehicle. Having never been raced or tracked and always adult owned, are two things that make this Z06 a rare find. This 2004 Chevrolet Corvette is the powerful Z06 model featuring a 5.7L V8 with 405 HP, which is a nice increase from the base models 385 HP. Painted a stealthy black over a black leather interior this ZO6 screams "speed." Equipped with a six speed manual transmission and heads up display this Corvette is one of the most exhilarating cars to drive, and will still somehow manage to average 20+mpg. One look in person at this low mileage Corvette and you will know it was well taken care of. Originally purchased at Putnam Chevrolet in Burlingame, CA this Vette has seen just one owner and was always garaged.

From 2002 onward, the Z06 produced 405 HP thanks to minor engine modifications including a more aggressive camshaft profile, lightweight sodium filled exhaust valves, stiffer valve springs, and deletion of the precats. These modifications have allowed the Corvette to sprint from 0-60 in a claimed 3.9 seconds and do the 1/4 mile in a blistering 12.4 seconds.

GM engineers have refined the Z06's shock damping characteristics to provide improved handling in the most challenging conditions, while maintaining good ride control for the demands of daily driving.

Continual analysis, development and refinement of the shock valves in particular resulted in more damping control and force, delivered more smoothly. This new tuning is aimed at diminishing the impact of yaw and roll on the car, particularly in quick, transient maneuvers such as "S-turns" or a series of tight corners.

"While the Z06 already had an excellent blend of extreme handling capability and surprising ride quality, we're never satisfied," Hill says. "The enhancements for 2004 provide a bit more poised and smooth response, connecting the car better to the driver's input, without the penalty of ride harshness."

These refinements are a result of extensive testing and development, including several high-speed test sessions at Germany's famed Nurburgring circuit. Corvette Z06 is one of only a precious few cars to have broken the 8-minute barrier for lap times at Nurburgring. Corvette testing at Nurburgring isn't just about raw speed, as the Z06 provides plenty of that. Engineers gathered important learning on tuning the chassis to enhance the poise, confidence and smoothness of response, attributes that are of great importance under the severe demands of a 14-mile course that has approximately 170 turns and virtually constant elevation changes.

"Nurburgring, at the extreme edge of the envelope, provides conditions that can't be easily duplicated anywhere else," says Hill. "But, even for the Z06, we spend considerable time ensuring we don't make adjustments that compromise the normal daily driving character of the car."

Please note that because the amount you offered was below the full Asking Price of $26,995, this offer will be considered but it is NOT guaranteed to be accepted, nor will it take precedence over other offers and you risk losing your opportunity to purchase this vehicle.