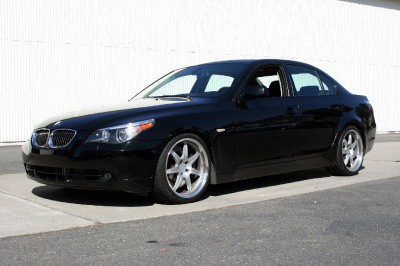 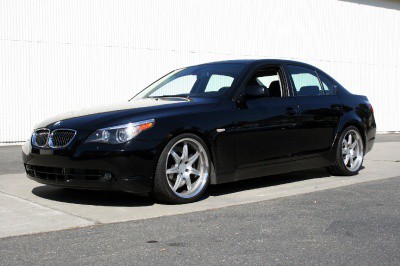 Dinan takes the 545 back to basics, skipping the high-tech extras in favor of simple upgrades that bring out the essence of the midsize Bimmer

As my colleague Dom Miliano has noted, an E60 5 Series with Active Steering, Active Stability Control, run-flat tires and an automatic transmission, can feel a bit remote, like a BMW with a dissociative disorder. Skip the Sport Package and it loses even more of its sport sedan identity, as well as much of its connection to the driver. Fortunately, there\'s a cure available at Dinan\'s Morgan Hill, CA clinic. Through the therapeutic application of grippier tires, wider wheels, bigger brakes, better suspension and a little more power, the 545i regains its sense of self along with the tactile sensations that normally make a BMW so feelsome. Let\'s start with the most elemental of those connections: the tires. In place of the standard run-flats, the Dinan 545i uses Michelin Pilot Sports that measure 245/35ZR-19 up front and 275/302R-19 at the rear. Though that combination is identical in size to what BMW uses as part of its own Sport Package, it adds 40 mm of rubber at the front axle and 110 mm at the rear to the 545i\'sstandard non-Sport setup, which also uses far less grippy all-season tires. Dinan mounts those Michelins on its own spread-forged alloy wheels, which it claims are the lightest available in the 9 x 19-inch front and 10 x 19-inch rear sizes. We don\'t doubt that, and in any case the combination reduces total unsprung weight by a claimed 47 lbs., 23.5 lbs. at each axle. Reducing unsprung weight especially by so substantial an amount has such a profound effect on vehicle dynamics that it\'s well worth the $2,648 asking price of the four-wheel set. The improvement is immediately noticeable from behind the wheel, conferring the Dinan 545i with a lightness that\'s almost unbelievable if you\'ve only driven the relatively ponderous standard car. Reducing the weight that hangs off the end of the suspension lets the dampers work more easily, and it also improves braking and acceleration by reducing the amount of energy required to either slow or set in motion these spinning parts. Dinan further improves vehicle dynamics by addressing each of the other components that affect them. The 545i\'s relatively modest one-piston calipers are replaced by sexy Brembos which trade single pistons for four and the standard 348mm front rotors for much larger 380mm discs (the rear discs retain the stock 345mm diameter but mount cast iron friction parts on aluminum hats in place of the standard one-piece rotors). Hugely expensive at $6,390, these brakes are also hugely worth it, especially if you have any track-day ambitions for your 545i. The stock brakes may be fine under normal driving conditions, but they tend to fade when above-normal demands are placed upon them. The Brembos, meanwhile, simply excel under any circumstances, and the confidence that endows can be priceless. By comparison to the brakes, Dinan\'s suspension setup for the 545i looks an absolute bargain at $1,741. Forsaking the more expensive JRZs of the S3-M3 for more pedestrian Konis paired with the company\'s own performance spring set, front camber plates and strut tower braces, Dinan has created a setup that\'s affordable and effective as well as sublime. The Dinan 545i feels taut and controlled from turn-in to corner exit, yet that precision doesn\'t come at the expense of ride quality. If anything, the Dinan car is actually more comfortable than the stock machine thanks to the reduction of body roll-something that can be particularly problematic for the back-seat passengers that a 545i owner will presumably carry on occasion. If those passengers are heavy, the Dinan 545i driver will be glad to have a little extra power at his or her disposal. By means of revised intake and exhaust systems as well as a high-flow throttle body, Dinan has upped the output of the 4 3 9 8 cc V8 engine from 325 hp at 6,100 rpm to 350 hp at 6,500 rpm. Torque increases similarly, from 330 lb-ft at 3,600 rpm to 343 lb-ft at 4,000 rpm. The additional power isn\'t earth-shattering, but it is enough to bring the 545iwithin 10 hp of its successor, the 550i, though it\'s still down on torque by 17 lb-ft compared to the newer model. Nonetheless, at around $6,000 the Dinan engine mods are certainly more cost effective than buying an entirely new car, particularly if you already own a 545i. More power can be liberated through the use of Dinan\'s lightweight flywheel, which shaves 7 lbs. (or 18%) from the stock flywheel\'s mass. We were unable to test the effectiveness of this part since the 545i we drove was equipped with an automatic transmission, and we were similarly unable to test Dinan\'s optional 3.45:1 differential to replace the standard 2.93 rear end. Both would undoubtedly enhance acceleration considerably, and we wouldn\'t hesitate to take advantage of both options were we building our own 545i and were money no object-the parts would together add $3,998 to the total package. One option that\'s unavailable from Dinan at any price is conspicuous bodywork. Though it undoubtedly frustrates photographers and art directors hoping for fresh visuals, Dinan\'s low-key approach is thoroughly appreciated by those who\'d rather fly below the radar than in full view. It also renders a Dinan car considerably more \"adult,\" retaining BMW\'s inherently low-key appeal rather than trading it for the often-embarrassing extravagances of most tuner cars. Underneath that unmodified exterior, however, lurks a car that embodies the essence of BMW even better than the standard product. More powerful, better handling and more comfortable while remaining equally versatile and usable, the Dinan 545i is like a 5 Series that\'s been reawakened from a coma. Tactile, engaging and alive, this is the 545i as BMW should have built it in the first place. Welcome to consciousness. (BIMMER, November 2006, pg. 91-92)_