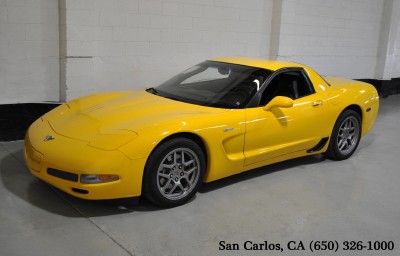 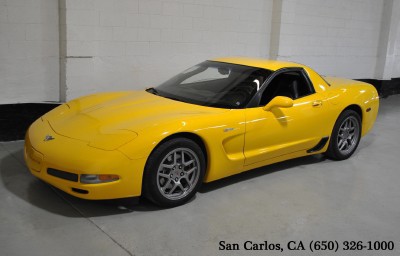 As far as bang for the buck goes, it simply doesnt get much better than a Z06. Producing 405 hp from its 5.7 liter LS6 motor, this 6 speed vette would make a great addition to your garage. Finished in Millennium Yellow with black leather seats, its exterior matches its on-the-road personality. The odometer reads just over 44,000 miles and has had 4 local adult owners. Regardless of age, the Z06 is a timeless performance machine and the following review still rings true today.

Are those comparisons important to you? And do you need that performance at a semi-affordable price? If so, then this is your sports car because it delivers that performanceplus legitimate super-car handling and braking and near-luxury quiet, comfort and conveniencefor about $51,000, a price unmatched by anything comparable on the planet.

Introduced in 2001 as a lightweight, ultra-performance coupe with a 6-speed manual transmission and a new 385-hp LS6 version of the 5.7-liter LS1 Corvette engine, the Z06 was the closest factory Vette in modern times to a track-ready racer. Calling it "simply the quickest, best handling production Corvette ever," Chevy said it was "aimed directly at diehard performance enthusiasts." For 2002, it got a 20-hp bump and a slew of additional refinements.

The Z06 designation honors the efforts of Zora Arkus-Duntov, Corvette's legendary first chief engineer who in 1963 created the original Z06 package, which was intended to make the then-new Sting Ray race-ready right out of the showroom. The current 405-hp LS6 engine is named for another Duntov creation, the 425-horse (gross) LS6 big-block V-8 introduced in 1971. Only 188 Corvettes were sold with that original LS6 engine, whichsecond only in power to the legendary L88 racing engine available from 1967 to 1969occupies a special niche in the Corvette legend.

Please note that because the amount you offered was below the full Asking Price of $26,990, this offer will be considered but it is NOT guaranteed to be accepted, nor will it take precedence over other offers and you risk losing your opportunity to purchase this vehicle.