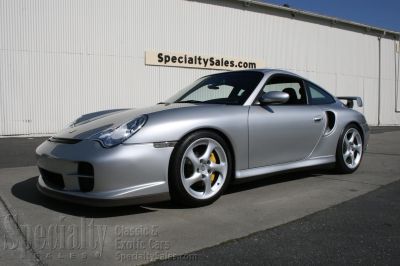 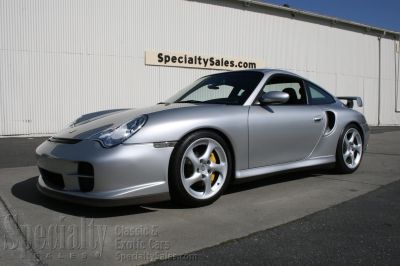 For additional pictures and information, view our entire inventory at www.specialtysales.com

_(from Porsche Press Release ) The Porsche 911 GT2, the ultimate Porsche model for 2002, is 10-percent more powerful and seven-percent lighter than the 911 Turbo on which it is based. The biggest weight savings over the 911 Turbo comes from making the GT2 rear-wheel drive (the 911 Turbo is all-wheel drive). Other weight-saving measures include fitting sport seats in front and deleting the rear seats. In place of a spare tire, there is a tire repair kit. Chassis modifications come directly from Porsches road racing experience. The GT2 can accelerate from zero-to-62 mph (zero-to-100 km/h) in about four seconds and can achieve a top track speed of 195 mph (315 km/h).

A modified version of the 3.6-liter twin-turbo six-cylinder boxer engine from the 911 Turbo allows an increase in maximum turbo boost pressure to 14.5 psi, compared to 11.76 psi for the 911 Turbo. The GT2 engine produces 456 horsepower at 5,700 rpm and sustains 457 lb.-ft. (620 Nm) of peak torque from 3,500-4,500 rpm. The only transmission available is a modified version of the 911 Turbo six-speed manual. A special asymmetric limited-slip differential helps stabilize the car in curves under load changes.

The 911 GT2 is the first Porsche to be fitted as standard with the Porsche Ceramic Composite Brake (PCCBTM). The ceramic composite discs weigh 50-percent less than comparable metal discs, reducing unsprung weight by a significant 36.6 lb. (16.6 kg) and thus enhancing suspension response.

The GT2 retains all current Porsche safety technology, including dual front airbags plus the Porsche Side Impact Protection System, which includes boron-steel door reinforcement beams, energy-absorbing door panels and door-mounted side airbags. The 30-liter capacity side bags provide additional protection for the chest, head, and pelvis.

Although the 911 GT2 deletes some of the luxury content from the 911 Turbo, its standard equipment includes power windows and an anti-theft system with transponder key, immobilizer, alarm plus central locking with remote entry. The GT2 substitutes a CD stereo system for the Bose digital sound system used in the 2002 911 Turbo. Automatic climate control and cruise control and natural leather trim are available as options._