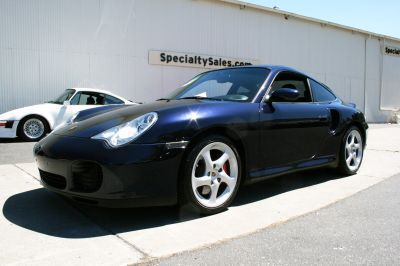 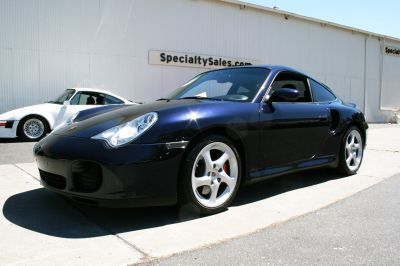 Excellent '02 Porsche 911 Carrera 996 Turbo Coupe finished in Midnight Blue Metallic on Black leather upholstery. The new-generation Porsche 911 Turbo continues a performance legend begun 26 years ago when the first 911 Turbo was introduced to North America. With a 415-horsepower twin-turbo engine and advanced all-wheel drive, the new-generation 911 Turbo takes its place in the top echelon of the supercar category. Derived from the Porsche GT1 racecar, the 3.6-liter, horizontally opposed six-cylinder engine sustains 415 lb.-ft. of peak torque from 2,700-4,600 rpm. In place of a conventional throttle cable setup, the E-Gas electronic throttle transmits pedal position to the engine control unit. Power drives through a standard six-speed manual transmission. The 911 Turbo can accelerate from 0-62 mph in just 4.2 seconds. On the test track, the 911 Turbo can sprint from a standstill to 100 mph in only 9.2 seconds and achieve a top track speed of 189 mph. Standard Bi-Xenon headlight clusters feature xenon high-intensity discharge headlights for both the low and high beams. The upper part of the two-piece rear stabilizer wing automatically raises at speeds above 75 mph and lowers at speeds below 50 mph. The standard aluminum alloy wheels measure 18 x 8 inches in front and mount 225/40 ZR18 tires; the 18 x 11-inch rear wheels mount 295/30 ZR18 tires. Also derived from the GT1 racecar, one-piece, four-piston brake calipers reduce unsprung weight and heat and feature 13-inch vented, cross-drilled discs front and rear. The standard Porsche Stability Management system (PSM) can detect a loss of grip at the front or rear and reduce instability by applying braking to individual wheels and, if necessary, altering engine power.

The 911 Turbo adds a standard Bose high-end digital audio system with six-channel amplifier, 12 speakers and a subwoofer module. In addition, the 911 Turbo adds new front seat belt pretensioners and force limiters to its extensive roster of safety technology, and the trunk now includes an anti-entrapment release with internal handle. New comfort and convenience features include: auto-dimming inside and outside mirrors and rain sensor windshield wipers. Interior enhancements include redesigned center vents, while matte-surface switches improve tactile feel. A new lockable glovebox adds to interior storage, and the center dash gains an integral cupholder.