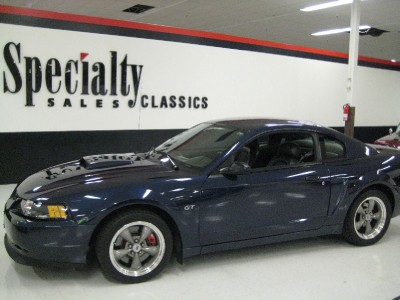 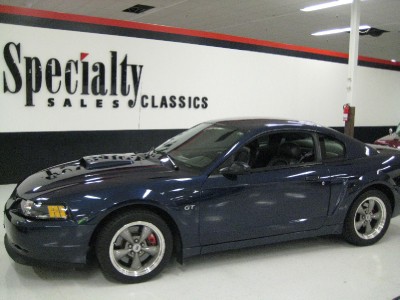 This vehicle is on display and available for sale at our Fairfield Showroom 707.419.8200 or sales@specialtysales.com

In 2001, Ford offered a special version of its GT with the Bullitt nameplate. It was reminiscent of the 1968 390 fastback model driven by Steve McQueen in the 1968 movie _ Bullitt_ which became famous for its high speed chase. The car was designed as a good handler so it was lowered 3/4 of an inch, received Tokico shocks, and short length sub-frame connectors. In addition, a new intake design, high-flow mufflers, and special underdrive pulleys helped increase the power to a conservative 265hp (198kW), though many owners report numbers closer to the 270-275 range. More telling is the torque curve, which was vastly improved over the base GT models, 90% of its 305lbft (414Nm) available from 2000rpm. This broader torque curve makes itself known at the drag strip, as these special edition Mustangs could cover the 1/4 mile in 2-3 tenths of a second quicker and about 2mph (3km/h) faster than regular GT. 17inch American Racing Torq-Thrust style rims, wrapped in 245/45ZR performance rubber by Goodyear, were reminiscent of those on the car driven by McQueen in the movie. The Bullitt featured a large hood scoop reminiscent of the earlier Boss 429 scoop, as well as new side scoops, lower body moldings and C-pillars with unique rear side window shape. Other special features on the Bullitt included aluminum pedals and shifter, gauge facings and seat upholstery patterned after the 1968 model, red brake calipers with the Mustang logo on them, and the removal of the spoiler and fog lamps regularly found on Mustang GTs, all for a cleaner look. Braking was also improved with the addition of dual-piston Brembo brakes with 13-inch (330mm) rotors, the same brakes utilized by the Mustang Cobra.

This 2001 Bullitt is especially rare being finished in True Blue equipped with a 5 speed manual transmission and with only 29,000 miles between 2 owners!

Please note that because the amount you offered was below the full Asking Price of $14,995, this offer will be considered but it is NOT guaranteed to be accepted, nor will it take precedence over other offers and you risk losing your opportunity to purchase this vehicle.