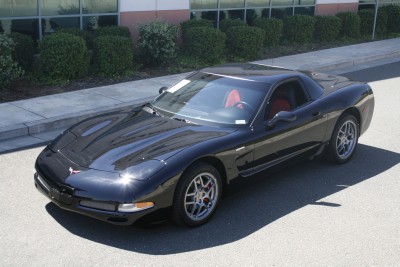 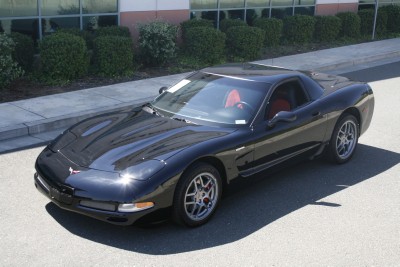 This vehicle is on display and available for purchase at our Benicia Showroom. 707.748.4000 sales@specialtysales.com

This first year Z06 (C5 generation) has extremely low miles, Under 4,000!! With so few miles, this car is sure to be investment potential! It still has that new car smell! The current owner only drove the car along the back roads on weekends! This car was custom ordered and purchased new in Dublin, California. The owner has made many performance and visual improvents to this Corvette Z06, it has been on the dyno and has 435 Rear Wheel Horsepower. This car is ready to rip up the asphalt!

The successor to the ZR-1 made its debut in 2001 as the Z06 , giving a nod to the high performance Z06 version of the C2 Corvette of the 1960s. Instead of a heavy, double-overhead cam engine like in the ZR-1, the Z06 used a high-output, tuned version of the standard LS1 Corvette engine (designated LS6), which initially produced 385 horsepower. Although its total power output was less than that of the last ZR-1, the Z06 was much lighter, out-performing the ZR-1 in every category except top speed. It also cost substantially less than the ZR-1. Like with the ZR-1, Starting with the most structurally rigid body style offered, the hardtop or "fixed roof coup" (FRC), an uprated FE4 suspension, larger wheel rims and tires, revised gearing ratios, and functional brake cooling ducts became part of the total package. The Z06 is 38 pounds lighter than a standard C5 hardtop thanks to weight-saving measures such as a titanium exhaust, thinner glass, lighter wheel rims, non-EMT tires, reduced sound proofing, fixed rear radioaerial, and a lighter battery.

In 2001, 5,773 Z06s were manufactured in five different colors: Quicksilver, Speedway White, Black, Torch Red, and Millennium Yellow. The most popular color in 2001 was Black while Speedway White was optioned in the fewest Z06s. Z06 sales increased by over 40 percent in 2002. Millennium Yellow, Torch Red, Quicksilver, and Black were held over from 2001. Electron Blue replaced Speedway White. Black was still the most popular color with Millennium Yellow being the least favorite. Color offerings remained the same in 2003; however, while Black was still the most popular selection, Quicksilver became the least popular in a model year that saw 8,635 Z06s produced. With expectations of the C6 generation, the final year of the C5 Z06 produced only 5,683 vehicles. In all, 28,388 Z06s had been produced during the C5 generation representing approximately one out of every five corvettes manufactured during the 2001 - 2004 model years.