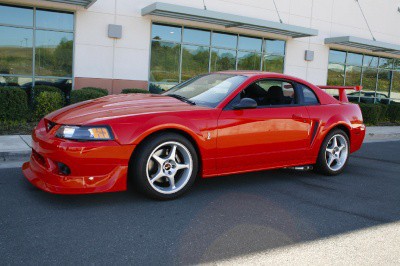 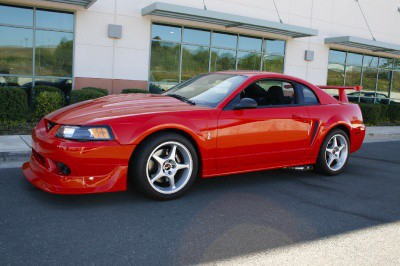 Located in our Benicia, California Showroom 707.748.4000 For our entire inventory, additional pictures and information go to Rare 2000 Ford Mustang Cobra R. Finished in Red over Grey interior. Powered by its 330cid V-8 / 385HP V-8 with a Tremec 6-speed Manual Transmission.

The 2000 Ford SVT Mustang Cobra R, wearing its production Performance Red paint, was displayed for the first time at the Specialty Equipment Market Association\'s (SEMA) annual convention. Built with the race track in mind, the Cobra R features a 5.4L 32-valve V8 engine, solidifying the modular family of engines as the high-performance benchmark in Ford\'s lineup. The Cobra R V8 produces an estimated 385 horsepower and 385 foot pounds of torque. In order to keep this power on the ground, the Cobra R features exterior enhancements including a front air-splitter and tall rear deck spoiler, which create downforce for increased stability at track speeds.

Other differences to the Cobra R include the \"power dome\" hood, which was required in order to fit over the Cobra R\'s unique intake manifold. The Cobra R rides on 18-inch wheels shod with BFGoodrich g-Force KD tires, and a lowered suspension for enhanced handling.

Cobra R\'s interior changes include the addition of Recaro sport seats, and the removal of the radio, air-conditioner and back seat to save weight. A number of well-respected performance parts suppliers are working with SVT in the development of the Cobra R, including Brembo for the front brake rotors and calipers, Tremec for the 6-speed transmission, Eibach and Bilstein for suspension, and Borla for the exhaust.

There were a limited production of only 300 Cobra R models built in spring 2000, on the same line of the Dearborn Assembly Plant which produces the V6, GT, and Cobra Mustangs. The 2000 model is the third generation of the Cobra R, following the successful and still sought-after 1993 and 1995 Cobra R models.

The debut Cobra R, the 1993 model, was introduced as a competition package, and included unique wheels, suspension and cooling upgrades, chassis bracing and a higher-output version of the 5.0L HO V8 engine found in the \'93 Cobra. Just 107 \'93 Cobra Rs were produced.