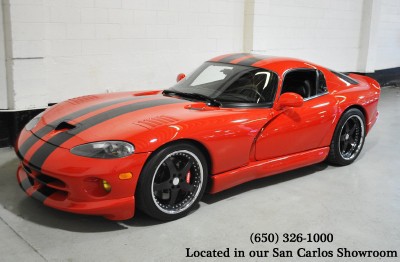 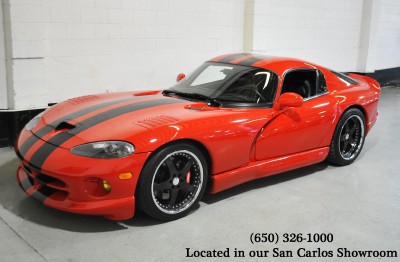 This modern classic comes to us from a local Viper enthusiast who has cared for it over the past 3 years.When you first walk up to this modern American classic, you will immediately take note of its impeccable condition.The odometer reads 34k miles and the car looks amazing! This Viper was taken to DC Performance when the vehicle was basically brand new where it received a number of performance upgrades that produced an amazing 594 horsepower and 587 foot pounds of torque. The current owner has been in possession of the car for the past 3 years and recently had the oil changed 1,000 miles ago and the clutch replaced 2,000 miles ago.

The modifications added are create an excellent total package.The nicest part is that the cars appearance has not been modified other than the forged, 3-piece wheels.Listed below are just some of the upgrades:

As you can see from the above, the car is balanced and developing this power without a turbo or a blower unit!This car must be seen and heard in person! Give us a call or e-mail to learn more or schedule a visit.

The Viper was conceived as a historical take on the classic American sports car. The iconic AC Cobra was a source of inspiration, and the final version of the Viper bears this out with its powerful engine, minimalist straightforward design, muscular and aggressive styling, and high performances. Some saw claims to kinship with the Cobra as a marketing exercise, ignoring that Carroll Shelby was heavily involved in the initial design of the Viper, and subsequent design of the Viper GTS coupe. Notably, the later (1996 through 2002) Viper GTS coupe took a few design cues from the Pete Brock designed Shelby Cobra Daytona Coupe. Though the proportions seem similar at first glance, the designs are quite unique. Carroll Shelby was key in the development of the RT/10 as well as having a hand in the development of the GTS (Viper Coupe) model.

The Viper was initially conceived in late 1988 at Chrysler's Advanced Design Studios. The following February, Chrysler president Bob Lutz suggested to Tom Gale at Chrysler Design that the company should consider producing a modern Cobra, and a clay model was presented to Lutz a few months later. The car appeared as a concept at the North American International Auto Show in 1989. Public reaction was so enthusiastic, that chief engineer Roy Sjoberg was directed to develop it as a standard production vehicle.

This Vehicle Is Located At Specialty SalesofSan Carlos**