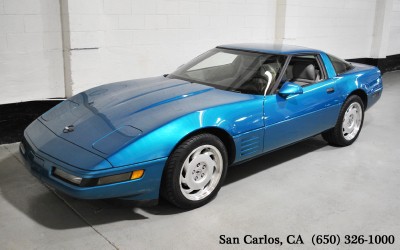 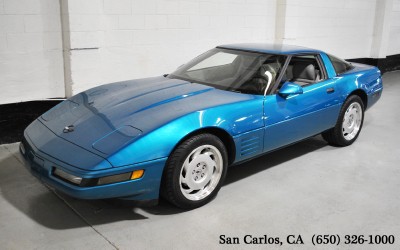 This immaculately maintained Bright Aqua Metallic '92 Vette was brought to our showroom by its second owner.The first owner purchased it in Walnut Creek, CA so this is a true Bay Area car.The odometer reads just over 70,000 miles which averages out to roughly 3500 miles a year.

1992 Corvettes were a great bang for the buck when they were new and it rings even more true today.There are not many cars that will give you this many smiles for this price.Give us a call with any questions or to schedule a closer look.

Starting in the mid 1970s, due to emissions regulations, power output dropped dramatically; the 1975 Corvette was rated at only 165 hp. Car enthusiasts were concerned. If the present was bad, what would the future, which promised more stringent regulations, be like? It did not look good.

They need not have worried. What happened was a long, slow and sometimes painful return to speedier times. Corvette engines steadily gained about five or fifteen horsepower almost every year. By 1991 the L98 base Corvette engine was rated at 250 hp.

It all changed drastically with the introduction of the LT1 motor in the 1992 Corvette.The LT1s horsepower increased by 20% to 300 hp. This was accomplished by using computer controlled ignition timing, a low restriction exhaust system, a more aggressive camshaft profile and free-flow cylinder heads. Max. RPM was 5700, a whopping 700 RPM more than its L98 predecessor.

Please note that because the amount you offered was below the full Asking Price of $11,990, this offer will be considered but it is NOT guaranteed to be accepted, nor will it take precedence over other offers and you risk losing your opportunity to purchase this vehicle.