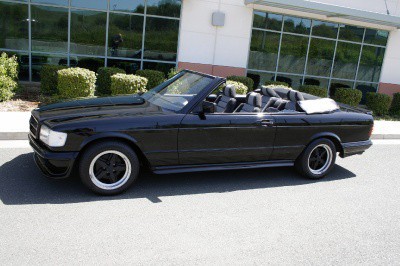 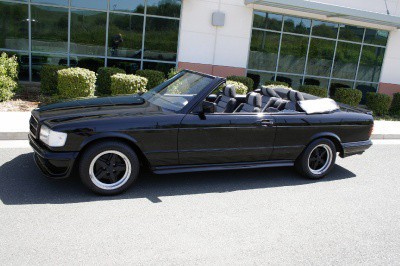 Stunning and rare '84 Mercedes-Benz 500SEC Cabriolet SGS Conversion (Euro Model VIN: WDB12604412006645).One of the few real-deal "Mercedes-Daimler-Benz" factory-authorized SGS SEC Cabriolet's imported into the USA.Imported into the US by the late John Siroonian in 1985, most notably known for being an avid car collector and his exquisite collection of hot rods.Also known for his contribution and successes in the wheel business.

These SGS SEC Cabrio's are comparable to any contemporary Mercedes Benz production cabriolet.You have to see it to appreciate the exceptional uncompromising euro mechanical workmanship and tailoring.The original 1985 SGS SEC MSRP retail price is estimated to have been approx $90k.Very few SGS SEC Cabrio's are known to exist in the USA.

With the top up, the SGS SEC Cabriolet rooflines are seriously the most beautiful and authentic having the same fastback aspect angles of the original SEC coupe (which is not the case with any other Euro or USA Cabrio conversions which require struggling with clumsy velcro roof-sail-panel anchors).

Styling Garage core business was converting and upgrading luxury cars to an even higher level.Most cars converted were Mercedes-Benz 500SEL and 500SEC. Conversions included fitting Gullwing doors, conversion to stretch limo, conversion to cabriolet.Also new interiors were fitted including leather upholstery, TVs with VCR, high-end stereos, refrigerators and Recaro sport seats. Styling Garage also converted some non-Mercedes cars like a Porsche 928 with Gullwing doors and a Rolls-Royce which was stretched and widened at the same time.Customers included many Sheiks, Arabian Princes, the Sultan of Brunei and several Hollywood actors.

Please note that because the amount you offered was below the full Asking Price of $23,990, this offer will be considered but it is NOT guaranteed to be accepted, nor will it take precedence over other offers and you risk losing your opportunity to purchase this vehicle.