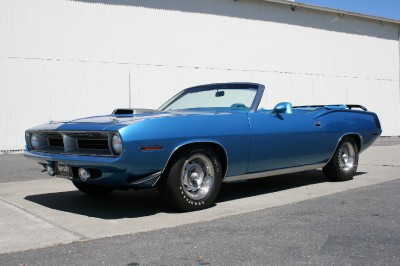 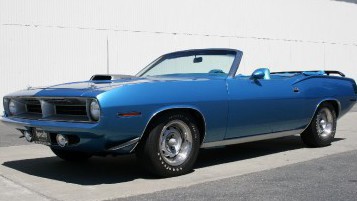 Specialty Sales is pleased to offer to the public, one of the nicest and most stunning authentic recreations of a '70 Plymouth HEMI 'Cuda Convertible available! A long time ago this car started life off as a 1970 Barracuda 383 Convertible. That original VIN number was BP27L0B138039.

Now fast forward to the late 90's when this car was restored. The builder of this car built 5 HEMI 'Cuda Convertibles this way. Supposedly he had a connection in the Chrysler plant and was able to get a genuine, authentic VIN tag stamped from the factory stamps using real VIN plates to show the car as a correct R-Code HEMI VIN number which read BS27R0B207413. Even the title was changed to show the correct R-Code HEMI VIN number. So basically the cars identity was completely stripped and removed and was made to look like a REAL '70 HEMI 'Cuda Convertible. Probably done not to deceive people, but rather make it as close to the real thing as you can get.

Well obviously that is a little too deceiving and could get someone in a lot of trouble. Needless to say, having this car in the wrong hands could have proved to be trouble if someone were to represent this as a REAL DEAL '70 HEMI Cuda Convertible. In fact, supposedly this car was sold for over $1 Million at one time when it was believed to be the REAL DEAL. But after some investigating and inspections by some people such as Galen Govier and Robert DeMars and Jeff Hyman its true identity came to surface. That was then.

So after all of that painstaking hard work he went through to make this car seem as real as it could, the car has been brought back to what it really is. The correct VIN was put back on the car (BP27L0B138039) and the title was changed back to match. The old R-Code VIN tag was taken when the new tag was reissued. We do have documentation though with this car having that VIN number. In fact, when this car was appraised by Jeff Hyman of Classic Auto Appraiser in 2006 for $425,000, it had the R-Code VIN tag and R-Code VIN title.

Now for what the car really is. This car has had a full restoration finished in the late 90's. It was built with the correct HEMI Brake Booster, Radiator, K-Frame and Exhaust System. It also has the correct date coded (12/08/69) 426 HEMI 425HP 2-4BBL 8 CYL (Engine# V426305565477) stamped to be correct numbers matching, correct Shaker Hood, Rally Dash, A-727 TorqueFlite Transmission (Transmission# PK3410667L), Rear Go-Wing and Rally Wheels with chrome trim rings and correct Goodyear F60-15 Polyglas GT Tires.

It is finished in correct EB5 Bright Blue Metallic over Blue Fire Irid interior; the body is rock solid and super straight. The dash and gauge cluster look just as good as the day it was new. All the glass is original and all the rubbers have been replaced. Everything works on the car including the clock, all the gauges and lights. Even inside the trunk was detailed to show condition. The front and rear suspension was rebuilt and the car handles very well. It looks and drives absolutely amazing and is a real head-turner. This car could be driven anywhere with ease.

You are bidding on a recreation of one of the sought after muscle cars ever built. Own this for a fraction of the cost of a real one. Bid to win one of the best HEMI 'Cuda recreations available.

Financing Available up to 144 months O.A.C. International Bidders Welcome! Worldwide shipping available to anywhere in the world! Please check our 100% eBay Feedback. We are the oldest and largest Classic Car dealership on the West Coast. Marketing Classic, Exotic and Performance Cars Worldwide for over 25 years!