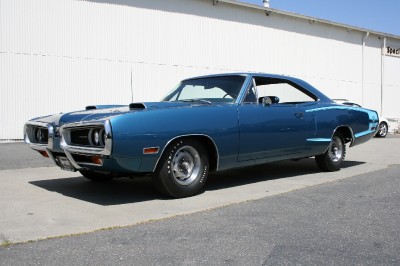 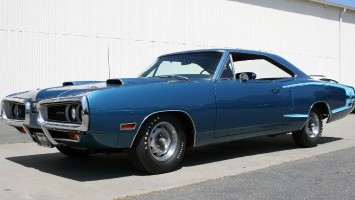 Our 1970 B7 Medium Blue Metallic Super Bee shows the final evolution in the styling for this body offered from Dodge. The front fascia was broadened and thickened, and strongly divided in what Dodge called the "Bumble Bee Wing" configuration. The tail lights were stretched and narrowed. Dodge wanted the vehicle unmistakable from its corporate sibling, the Plymouth Road Runner, and our example may be the finest offered anywhere.

The flawless dark blue interior features a big bench seat, three spoke steering wheel, and the massive, pistol-grip shifter from Hurst. The side windows raise and lower with the strength of a human arm, and the dash houses a full compliment of gauges.

Under the "RAMCHARGER" hood with functional power bulges resides rugged and durable 383 Magnum V8. Rated at 335 horsepower @ 5200 rpm and 425 ft-lbs. of torque @ 3200 rpm, with the four barrel carburetor, this engine has only 150 miles on it after a full rebuild.

A heavy duty suspension, power steering, the A-833, four speed manual transmission, and premium road wheels deliver all the power to the pavement. The Reverse "C" Longitudinal Stripes surrounding the "Super Bee Scat Pack" decal on the tail mark this vehicle as the last and most desirable Super Bee based on the Coronet body.

Please note that because the amount you offered was below the full Asking Price of $36,990, this offer will be considered but it is NOT guaranteed to be accepted, nor will it take precedence over other offers and you risk losing your opportunity to purchase this vehicle.