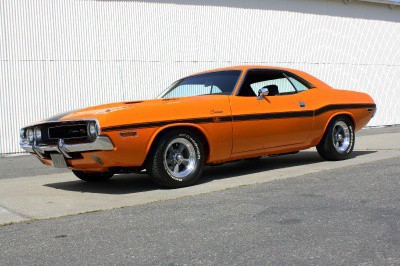 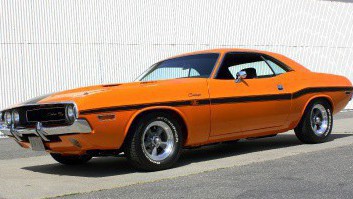 Outstanding'70 Dodge Challenger R/T426 HEMITribute Hardtop finished in Go-Mango Orange over Black interior. Powered by its HEMI426 V8 backed by a built heavy-duty A-727 Torquflite transmission. This Challenger has been treated to a complete frame-off, no-expense-spared, nutand boltshow quality restoration done to HEMIspecs. This is one of the nicest restorations we have come across. Absolutely stunning inside and out, top to bottom! Pictures do not do this car justice! Do not miss out on this blue-chip investment quality MOPAR.

Not a crate motor. A brand new 426 block was used and all components on and in the motor are new current production with the exception of the water pump housing. It is correct HEMI however, and it has a new high output water pump of course. Engine was epoxy primed then painted single stage polyurethane enamel same color as car. Completely built heavy-duty A-727 Torqueflite transmission built to HEMI specs. New 8-3/4" Sure Grip rear-end with 3.55 gears (the only thing orginal is the housing). All new brakes, bearings, seals, axles etc. All suspension including springs, torsion bars, front sway bar, etc., are new and correct HEMI spec. Over 300+ hours invested in the mechanicals alone.

Anything that could be taken off and unbolted was. All sub assemblies including latches, regulators etc., were torn down as far as they could into individual pieces. Rear quarters, outer wheelhouse panels, trunk extensions and panel between rear window and decklid removed and sent out to media blaster. Upon return anything that was going to be covered with new sheetmetal was epoxy primed. The weld panels were then fit and welded. Epoxy prime, body work and then fill prime. The body work on the doors and fenders were done off of the car at eye level and are laser straight. The panels were primed, blocked, primed, blocked and then painted. There are no paint lines anywhere on the car. Even though the under body was ready for paint, it was decided to epoxy prime then use SEM spray on bed liner underneath for a host of reasons. Chassis paint on K-frame, control arms, rear end housing, and small suspension pieces. Extra time spent on panel fitment and it shows as the doors and trunk shut like a vault. The above described work took 7 months working on it full time.