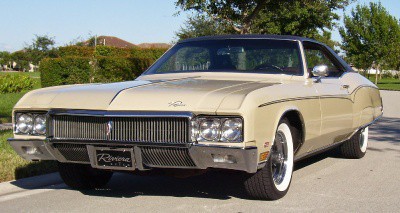 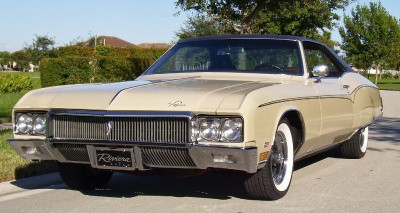 Specialty Sales is proud to announce this 1970 Buick Riviera grand Sport for sale as one of our off-site vehicles. Call (650) 326-1000 for more information.

Buick Riviera GS. \"Was Stored In A Humidity Controlled Building for 37 Years Of Its Life.\" Sandpiper Beige with Dark Brown Bucket Seats and Vinyl Roof, 455 Cu. In., 370 H.P., 510 Pounds of Torque,(One Year Engine), Center Shifter Console, A/C, P/Steering, P/B, P/W, P/Seats, Posi/Rear, Radio Rear Speaker, Remote Trunk,Clock,Stainless Exhaust, New Radials. \"Everything Works.\" Car Shows, \"As New\" with \"No Excuses\". Possibly The Only One Of Its Kind On The Planet.\" Car located in Vermont only One Hour from the Albany, N.Y. Airport. Trade 1936-1949 Cadillac, Buick, Chrysler. \"Free Winter Storage Until Spring If Desired.\"

1/) The mileage is 32,523 original miles. I am the third owner. The car was originally from Ohio, from what I was told came from a collector and was sold to the second owner, a gentleman from Florida from whom I purchased the car.

2.) The car was inspected thoroughly prior and after me purchasing the car and with No Hint of any damage or bondo of any kind to the best of my knowledge. The car appears to be totally accident free.

There are several very small areas that have been addressed. There are approximately 5 small chip areas,(about "one quarter size", of a pinky nail.), where the chrome strip meets the body and 2 areas of,( same size,) paint bubble areas. These areas were left undisturbed and then addressed by having an exact paint match being made and then dabbed with clear lacquer.

There are no significant signs of aging in the paint. I would rate the paint at a 8 to 9 out of 10. (10 being the best.) The chrome is in Very Good condition. The Glass is Very good all around.

3.) Not original Items:
a) Has a New 3 Core radiator which was installed by the second owner.
b.) A new heater control valve.
c.) A New battery.
d.) New Wide White Radial Tires.
e.) New Shocks.
d.) In order to take advantage of the excellent condition of the undercarriage I had it coated with a product called, "Por-15", which is an Epoxy Paint that seals a surface for life and protects it against rusting.

The steering wheel is original. However, the original steering wheel had a "Rim Blow" Horn. Meaning there was an embedded brass ring in the circumference or the wheel and in theory one could depress anywhere on the wheel to operate the horn. I say in theory only because the darn thing didn't work properly from the day it was manufactured. My solution was to retain the original wheel and install a hidden horn button directly under the wheel from which the horn could be activated.

Everything works. The power seat is slow in operation only because when the car was manufactured the factory would pack "lithium grease" into the power seat motor housing and over the years it would harden. I elected not to address that for it wasn't a problem for me.

The engine is perfect. Runs like a dream and has never been abused. Engine does not smoke or leak. Only use a 20-50 W racing oil as well as a Zinc Replacement additive called "ZRA". The newer oils had to remove the zinc and other elements of the older oils to meet new EPA requirements and that's fine for todays engine but not the engines of yester-year.

The transmission shifts perfectly and does not leak. All the fluids,transmission oil, rear end and radiator has been flushed and refilled with fresh fluid and filters where needed.

The car needs "Nothing."

Please note that because the amount you offered was below the full Asking Price of $26,995, this offer will be considered but it is NOT guaranteed to be accepted, nor will it take precedence over other offers and you risk losing your opportunity to purchase this vehicle.