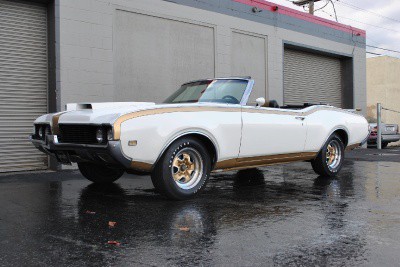 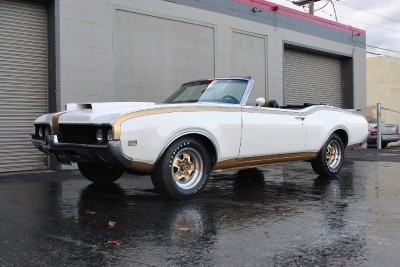 This exceptionally rare 1969 Hurst Oldsmobile Convertible is one of two ever produced and is offered for sale publicly for the first time ever. The car was specially built to the exact specifications of the original owner, Richard Pierce, a now retired Hurst Performance V.P. who ran the division's brake department. The serial number on the car reads: 344679M409421. This Oldsmobile was not your average 442 that you would find at the local dealership, but rather a product of the Hurst Performance Division that was never put into production for the public.

The 455 C.I. Rocket V8 produced 500 pounds/feet of torque and was designed to handle the track duties it received in promotions and race-day events. Pictures of this rare convertible can be seen throughout the internet and are likely apart of many race-fans' photo albums. The iconic photos of Linda Vaughn standing on the back of this Hurst Oldsmobile convertible with an oversized and daunting Hurst shifter is etched in the memories of many, and makes this car special on a cultural level as well. Fitted with a dual gate shifter with a goose neck, this setup was a prototype look that never found its way in to the 1969 Oldsmobile lineup which featured a center console instead. Gold stripes followed the car's hulking lines and also found their way into the headrest inside the car, while gold carpeting brightened up the black interior. The original style Goodyear polyglass tires have been fitted on the gold SSII 15 inch wheels, bringing this Oldsmobile as close as possible to its original state.

This exclusive performance Oldsmobile is now 40 years old and has seen only two owners. All of the integral engine parts are intact and original, with the only changes including a body re-paint, new convertible top, and an interior that was refurbished 6 years ago.The original patina from when the car was used on the track still exists today, as small screws securely hold the chrome pinstripe that had come off during the car's use as a pace car; and a small dent in the rear bumper is still evident and recognized as proof this Hurst held the large platform displaying the Hurst shifter. Within the trunk of the car there is an electrical plug to where the platform and shifter sourced electricity to power the display lights.

If you are an Oldsmobile fanatic or simply looking to own a piece of automotive history this is one of the rare cars on the market that has yet to ever go through an auction house. With only one other car of its kind in possible existence this Hurst Oldsmobile convertible is truly priceless.

Please note that because the amount you offered was below the full Asking Price of $639,990, this offer will be considered but it is NOT guaranteed to be accepted, nor will it take precedence over other offers and you risk losing your opportunity to purchase this vehicle.