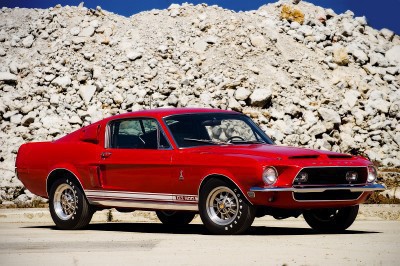 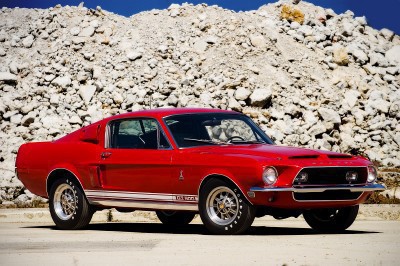 This vehicle is displayed in our San Carlos California Showroom (650) 326-1000. For the entire inventory, additional pictures and information, go to www.specialtysales.com

Here is a fully documented and absolutely gorgeous Shelby GT 500. This car is a rare example and one of only 458 dressed in Candy Apple Red. All correct 428 Police Interceptor 410 HP Cobra Jet, Factory Roll Bar, Power Steering and Brakes, Shoulder Harness, Interior Dcor Group, Ram Air Intakes, Hood Locks, 10 Spoke Shelby Wheels with Goodyear Tread, Fully Documented with Dealer Invoice and Deluxe Marti Report, Order Sheet, Retail Sticker and More. This great car is listed on Page 933 in the Shelby Registry. All of the documentation is sorted and sleeve protected. This would be an amazing car to acquire. Weather to start or to add in order to strengthen anyones collection, this Candy Apple Red Shelby GT 500 is the epitome of the American Muscle Scene.

In 1964, the Ford Motor Company fired the first shot in the Pony Car Wars, introducing an adaptation of their popular compact Falcon that would change the American car market and even stood as a symbol of a revolutionary decade: the Mustang. Itself a compact sporty car offered at an attractive price and aimed at youthful starting car buyers, the Mustang immediately made a big impression and it sold very well; the original Mustang still holds the record for first-year new-model sales of an astounding 680,989 units between April 1964 and August 1965, when it was replaced by the 1966 model.

From early days, Ford's division chief Lee Iacocca still felt that the Mustang's image needed a boost, so he contacted former racecar driver and nascent sports car manufacturer Carroll Shelby, famous for the iconic Ford powered AC Shelby Cobra and also involved in Ford's GT40 racing car project. Shelby was asked to modify the Mustang in a way so it could win the Sports Car Club of America's national B-Production Championship Series. And so, early in 1965, a new competition breed of Mustangs came into life; finished at the Shelby-American shop in Los Angeles and topped off with Shelby badges and trademarks like the Cobra's own logo and named the Shelby GT-350, the designation that would go on all small-block Shelby Mustangs until 1970.

A change was in the works for both Shelby and the Ford Mustang during 1966. With lessons learned from Shelby transforming his GT-350s from docile pony cars to thundering thoroughbreds ill-suited to everyday driving, Ford realized they were missing out on an audience they shared with the Cobra's creator, who were demanding more civility, and the original pony car was undergoing a revamp that finally gave it room for big-block power. With the introduction of the 1967 models, regular Mustangs could get a 320-bhp 390-cid four-barrel V-8. Shelby, naturally, went further. His GT 350 retained its 289-cid V-8 with its 306-bhp rating. And a new model, the 1967 Shelby GT 500, got a reworked 428-cid "Police Interceptor." This 428, in all its forms, was otherwise reserved for bigger Fords where it made 345hp. Shelby then took this as his starting point, added the cast-aluminum medium-rise intake manifold from Ford's 427, twin 600-cfm Holley four-barrel carburetors, and other tweaks for a conservative rating of 355 bhp. For even more get-up-and-go, a handful of 1967 Shelby GT 500s were equipped with Ford's near race-ready 427ci V-8 during manufacture or through dealer service departments.

Featured here is a second-year example of the GT-500. Fitted with the Police Interceptor 428ci Cobra-Jet and a 4-speed manual transmission from new, it is one of less than 1020 built and one of exactly 458 in Candy Apple Red. Nicely optioned including the 6,000 RPM hydraulic camshaft, power disc brakes, power steering, ram-air intake, hood locks, remote driver's side mirror and the interior dcor group, it also conveys to its next owner with full documentation including the original Shelby invoice, GT500 order form, Marti Report and years of receipts documenting its care and restoration. Registered with the Shelby American World Registry as GT500 #00551, this sought-after icon of Ford and Shelby's collaboration during the height of the muscle car era is hard not to look at just once.

Please note that because the amount you offered was below the full Asking Price of $149,990, this offer will be considered but it is NOT guaranteed to be accepted, nor will it take precedence over other offers and you risk losing your opportunity to purchase this vehicle. 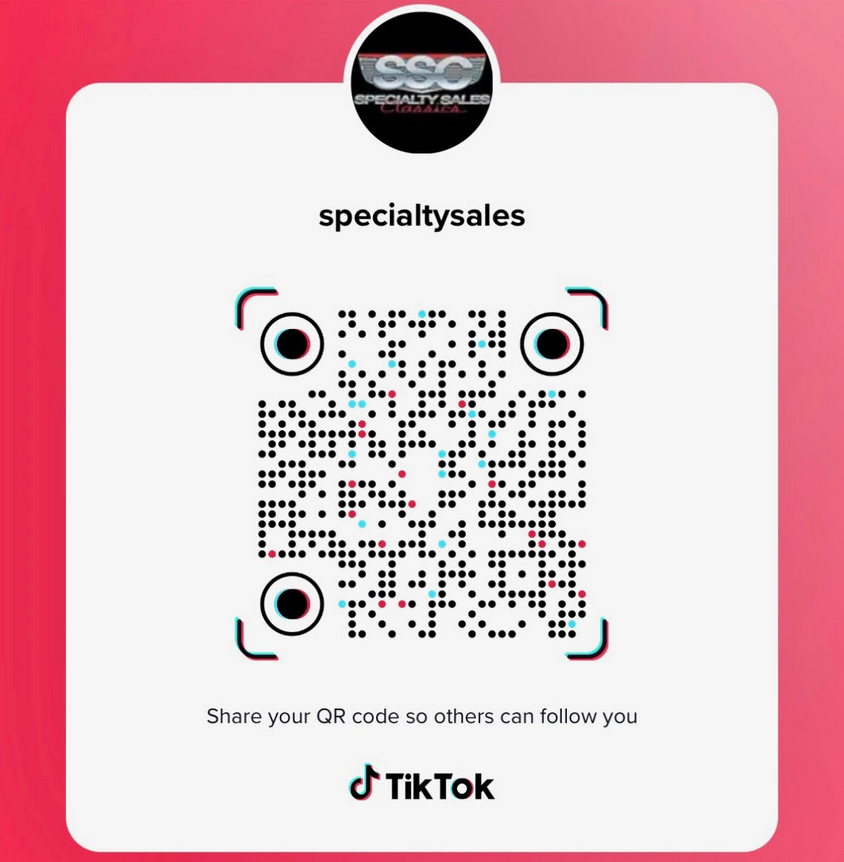