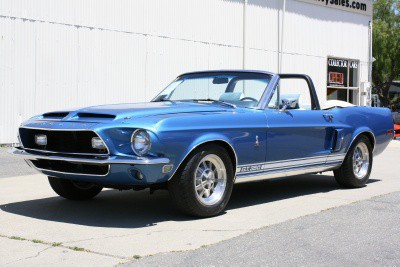 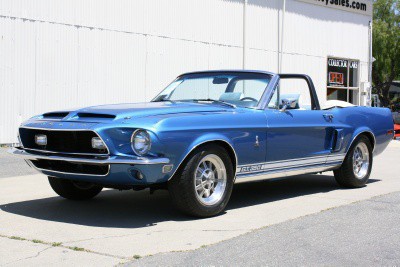 Elegant 1968 Ford Shelby GT 350 tribute car! This stunner is wrapped in '68 Acapulco Blue and is powered by its 302 V8 with GT40 heads, and Holley carburetor. This San Jose production carhas been signed on the dash by "the man" himself, Carroll Shelby. Some upgrades to this classic are new lower front control arms, front disc brakes,new Robbins convertible power top and Shelby roll bar, and this beauty sitson clean ten spoke Shelby Wheels. The engine was rebuilt to GT350 specs using GT40 heads, Cobra intake, the aforementioned Holley carb, Tri Y headers, Ford Motorsport cam....thus making it crank out an impressive 325 HP, and along with a 2.8 rear end this makes for a powerful, yet eminently comfortable, riding car. The rebuilt engine has but 11k miles on it.

Current ownership dates back to 1993 and is believed to be just the third in its 42-year life, and the mileage is represented as original on top of it all.

This ground up restoration and recreation used NOS parts that were collected during the 70's and 80's. A San Jose, California production car automatic, power steering, power brakes with 84K original miles at purchase in 1993 from it's second owner in Sacramento. Car was presented to Carroll Shelby as a "Tribute to Shelby" at Sears Point Raceway during the 30th Anniversary Cobra event at the Wine Country Classic June 1995. Photo is included of Carroll Shelby signing the car. Work included body of restoration to Shelby Body Recreation, new custom interior and more. This amazing Mustang is indeed a true Classic with the Shelby Pedigree that drives and looks awesome.