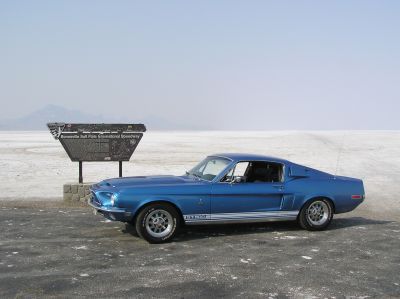 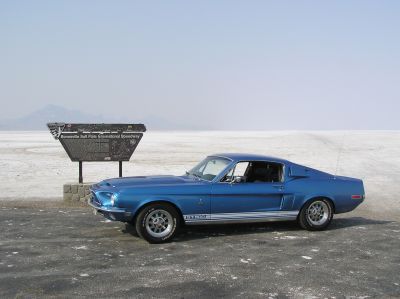 1968 Shelby GT 500 with only 76k miles, 428 FE, C-6, Nodular 9 inch, 10 Spoke Shelby Wheels. Blue/Black, an Authentic Shelby!!!Its Shelby number is 1408. It is in excellent driver condition. Very presentable paint work in the original acapulco blue colour (quite rare). The interior is mint condition and totally original right down to the carpet. The chrome on the gauge pod is even in perfect original condition, which is evidence of the car being garaged its entire life. It has the original console, lid and SW gauges which alone are worth more than the console's these days.

The Shelby is in the Registry. The VIN or Shelby number will be available prior to the point of purchase in person for security purposes. According to the owner this is a genuine Shelby. It still carrys its original (not reproduction) Shelby ID plate on the engine bay.

It has its original 428 engine which has been balanced internally (balancing marks evident on the crank). It has the original pulleys on the engine, including the super rare factory air conditioning crank pulley, original date coded harmonic balancer pulley, alternator bracket with the bend in it (cobra jets only) and the unique power steering pump pulley (smaller for cobra jets). It also has the original and expensive C8 Holley carby and the original unmolested steel air cleaner base. These items are all very very difficult to source and purchase these days.

It runs beautifully. My wife and I drove the Shelby from the East Coast of the USA to California with no problems at all, getting about 12mpg. (see pic of the Shelby on the Bonniville Salt Flats for a tourist picture!)

I have found a near perfect Ford factory build sheet in the car - this is the neatest find of all. It is like new. I also have a Marti report confirming the vehicle's identity.

It was purchased new by an American Serviceman from Gotham Ford in NY and then shipped to Italy, probably by the Military themselves. It was reported to have blown an engine in Italy, but checks of the engine in the car today reveal that it is the original engine, so I am guessing that whatever happened to it was not major. It was sold and shipped to England in 1970 and has been there ever since, only being shipped back to the US in 2006.