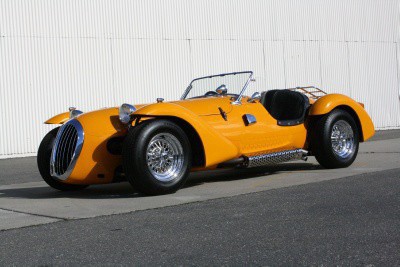 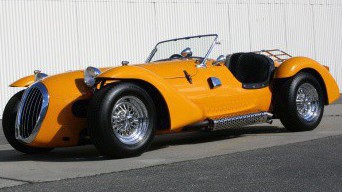 We are pleased to offer this very unique and attractive Kougar Jaguar 3.4S Sports MK II Roadster. While some Kougars were delivered in kit form to their first owner, this car was assembled at the factory and the quality of assembly and level of craftsmanship reflect this. This is reportedly one out of approximately 250 produced. Sold new to Mr. James Routledge of Sussex, UK on August 3rd 1967. It remained in the UK until it was imported into the US and has been in the current owners family here in CA since 1980. The car operates wonderfully having been treated to much recent work including a complete engine teardown and rebuild which was just completed.

This particular example is titled in California as a 1967 Jaguar 3.4S, the car from which most of its components are derived. It is powered by a 3.4S twin overhead cam inline 6 cylinder Jaguar engine, mated to a Jaguar 4-speed transmission with electric overdrive . Front and rear suspension is taken directly from a Jaguar, retaining Jaguars innovative inboard rear disc brakes and independent rear suspension. The chassis is a very rigid round tubular space frame design, covered by an attractive fiberglass body distinctive of the 1950s era.

Considerably lighter and more agile than an XKE or Jaguar sedan, this Kougar will out corner, out accelerate, and stop faster than virtually any Jaguar available to the general public in the 1950s or 1960s. The engine starts easily and makes excellent power accompanied by the wonderful inline 6 cylinder exhaust note from the side pipe exhaust. The transmission shifts smoothly as it should, suspension is well balanced and the brakes are effective.

Cosmetically the car is in good condition with its original paint job finished in Golden Sand with Brown detail pinstriping that still shows very well. The chrome wire wheels are in great condition as is the rest of the chrome and brightwork which is also in good condition. This particular example also features a rear luggage rack. The interior is finished in Black vinyl, accented with a vintage British Moto-Lita hand-crafted leather steering wheel, wood shift knob, Smiths gauges and harness seat belts.

This Kougar comes with documentation going back to new including the UK registration booklet showing ownership and Kougar manual. Registered as a 1967 year model this car is smog exempt in California. This Kougar 3.4S is an excellent value and a fascinating conversation piece. If you are looking for something different, unique and very fun to drive, this Kougar Jaguar is it!

Please note that because the amount you offered was below the full Asking Price of $59,990, this offer will be considered but it is NOT guaranteed to be accepted, nor will it take precedence over other offers and you risk losing your opportunity to purchase this vehicle.