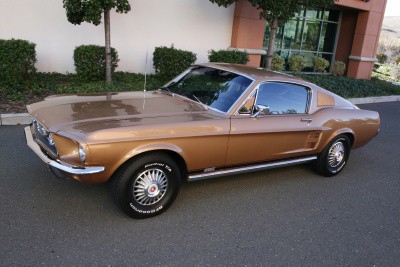 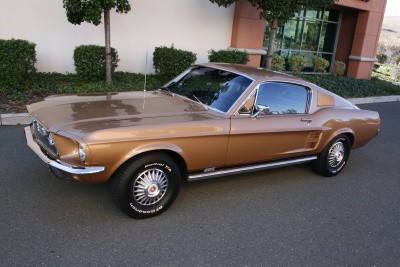 This beautiful example of this iconic American Sports Car is a 1-Family 2-Owner California car. They have taken spectacular care of this legendary vehicle and always kept it in the garage. It comes with receipts and records since 1967. Located at our Benicia Showroom 707.748.4000. For our entire inventory go to www.specialtysales.com

The Ford Mustang is a car manufactured by the Ford Motor Company. It was initially based on the second generation North American Ford Falcon, a compact car. Introduced early on April 17, 1964, the 1965 Mustang was the automaker's most successful launch since the Model A. Original sales forecasts projected less than 100,000 units for the first year. This mark was surpassed in three months from rollout. Another 318,000 would be sold during the model year (a record), and in its first eighteen months, more than one million Mustangs were built.

The Mustang created the "pony car" class of American automobile sports car-like coupes with long hoods and short rear decks and gave rise to competitors such as GM's Chevrolet Camaro, AMC's Javelin, and Chrysler's revamped Plymouth Barracuda. It also inspired coups such as the Toyota Celica and Ford Capri, which were exported to the United States.

As Lee Iacocca's assistant general manager and chief engineer, Donald N. Frey, supervised the development of the Mustang in a record 18 months. The Mustang prototype was a two-seat, mid-mounted engine roadster. The Mustang I was later remodeled as a four-seat car.

The design team had been given five goals for the design of the Mustang: it would seat four, have bucket seats and a floor mounted shifter, weigh no more than 2500 pounds and be no more than 180 inches in length, sell for less than $2500, and have multiple power, comfort and luxury options.

The 1967 model year Mustang was the first model to feature a major redesign with the installation of a big-block V8 engine. The overall size, interior and cargo space were increased. Exterior trim changes included concave taillights, side scoop (1967), square rear-view mirrors, and usual yearly wheel and gas cap changes.

Please note that because the amount you offered was below the full Asking Price of $34,990, this offer will be considered but it is NOT guaranteed to be accepted, nor will it take precedence over other offers and you risk losing your opportunity to purchase this vehicle.