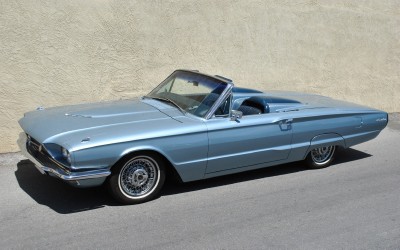 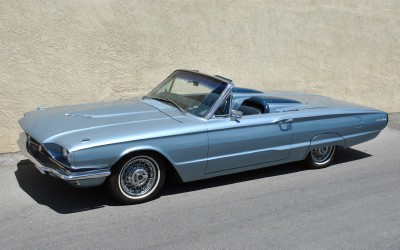 This Brittany Blue beauty comes to us from the 4th owner who has had it for the past 20 years. The condition of the car is solid throughout from the exterior, interior, and even underbody. One of the most striking features of this T-bird is the tonneau cover with the headrests, giving that batmobile look. It is definitely one of those accents that really contribute to the immense curb appeal of the car.

The current owner had the car painted almost 18 years ago, and we can honestly say that it still looks great. That is a testament to the owners pride and love of this car. It has yet to spend a night uncovered! We have many receipts for various repairs and work done over the years. Most notably the original engine was rebuilt 2 years ago.

The third generation Thunderbird was restyled in favor of a more squared-off appearance, which was mostly evident when viewing the car from the side or rear. Hinting at its roots in the previous generation Thunderbird that it was evolved from, the new model retained a similar grille design with dual headlights. As before, the new Thunderbird continued to be offered in hardtop, convertible, and Landau versions. The 300 horsepower (220 kW) 390 cu in (6.4 L) FE V8 continued as the standard engine for the Thunderbird while a higher compression, 330 horsepower (250 kW) version of the engine was optional. Both V8s were paired with a 3-speed automatic transmission. Also new for 1965 were standard front disc brakes.

Even though it was the last year of the generation, 1966 saw a stylistic revision for the Thunderbird highlighted by a new egg-crate style grille with a large Thunderbird emblem at its center and a new rear fascia with the brake lights restyled to appear as one unit. Engine choices were also revised for 1966. The base version of the 390 cu in was upgraded to 315hp and the upgraded motor was a 428 cu putting out 345hp.

Give us a call or send us an email to learn more or to schedule a visit to our showroom. This one will not last long!

Please note that because the amount you offered was below the full Asking Price of $29,995, this offer will be considered but it is NOT guaranteed to be accepted, nor will it take precedence over other offers and you risk losing your opportunity to purchase this vehicle.