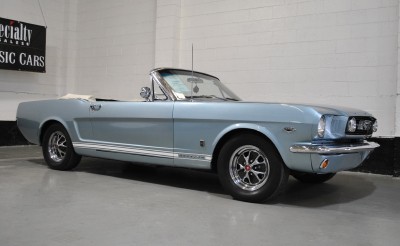 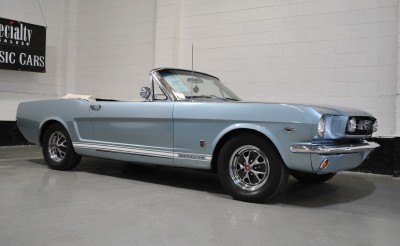 Here is decoded dataplate from the car:

You will be immediately impressed how evenly the car has aged unlike many of the cars out there.This truly is a K-code that you can begin enjoying immediately without having to addressany issues.

Buyers of the GT Equipment Package could add the K-code to their new ride for an extra $276 back in 1965. The cost to add this engine to new Mustangs without the GT package was $328. The K represented the engine code on the VIN number of these Mustangs. The K-Code engine was first introduced by Ford in 1963, and was featured in cars such as the Fairlane and the Comet.

Each K-Code Mustang had a special badge on their front fenders that read HIGH PERFORMANCE 289. No doubt about it, the K-Code Mustang was all performance. In fact, K-Code Mustangs were not available with air conditioning or power steering. And you couldnt buy one with an automatic transmission until the 1966 model year. Prior to that K-Code Mustangs were 4-speed only. The car also came with a shorter warranty than the typical Mustang. K-Code buyers were looking at a 3 month or 4,000 mile warranty instead of the standard 12 month or 12,000 miles plan. I guess the folks at Ford figured most people who purchased the car would put it through its paces on a daily basis, and they were probably right.

People often ask how the K-Code engine was different from the other D,C, and A code 289 engines featured in 1965-1967 Mustangs. Well, once again, think performance. For starters this engine featured upgraded pistons, cylinder heads, carburetor, solid lifters, and connecting rods. In addition, one look under the hood and youd notice the chrome air cleaner and valve covers. Oh, and we cant forget the 289 High Performance lettering atop the air cleaner. With an estimated 271 hp at its disposal, it was easy to tell this car from other 289 powered Mustangs of the day.

But wait, theres more. The differences didnt stop there. In fact, the entire driveline of these cars was designed for performance. Were talking about a high-performance clutch, drive shaft, rear differential, and suspension. Its no wonder Shelby put the engine in his racing performance GT350 Mustangs. In fact, the first Shelby Mustang, the Shelby GT350R featured a modified K-Code engine.

These days collectors of the Ford Mustang look back fondly on the K-Code. As such, they are highly sought after. Unfortunately only a limited number of these engines were produced between 1963-1967, and even fewer K-code Mustangs (About 13,214). If you own one, you own a valued piece of history. If you want one, join the club.

Please contact us with any questions or to schedule a visit to our showroom.This is one car that is not going to last long!

Please note that because the amount you offered was below the full Asking Price of $42,990, this offer will be considered but it is NOT guaranteed to be accepted, nor will it take precedence over other offers and you risk losing your opportunity to purchase this vehicle.