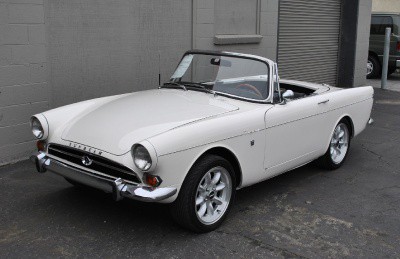 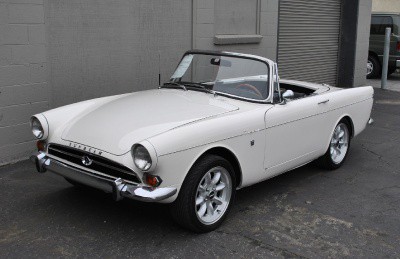 Then, around the bend came the Sunbeam Tiger. The sleeper, the wolf in sheeps clothing, two face, two timer and trickster. What looks like a tame Alpine star is in reality a lightning quick, fire breathing meteor. This Sunbeam Tiger is F-A-S-T!

If you are looking for one of the fastest Tigers on the market today, look no further. First of all the body has been completely soda blasted and has recent paint work that is fantastic. The interior is very tight and proper. The dash looks truly awesome and has a rare and early appointed Smith clock within the gage cluster. This car has a Ford 289 V8 that has been professionally balanced and tuned has a Holly 650 cfm Double Pumper on top of Shelby F4B aluminum intake, a mild cam, SVO aluminum heads with roller rockers, flat tappet lifters and even a coated flowed oil tray. Tuned headers are here with Pin Point exhaust 2 & 1/4cross member flow pipe and Flowmaster mufflers. Transporting this V8s estimated 340BHP is a World Class Tremec 5 speed manual transmission, buttoned up with a Tom Hall cast tail shaft kit for precise shifting and fit. The rear end has the original Tiger Positraction differential and wheels are upgraded to aluminum Panasport Racing Wheels with fresh Yokohama tires fitting for the street. (Original wheels will come with the car). Other extras include a new windshield, electronic ignition and Nardi racing wheel.

Look closely at this package. It has been done to very high standards and has gone through diligent shake down runs for drivability. This super car will give you all the pleasure of a rare unassuming Sunbeam that will simply amaze and blow away any car in its class. The sound stance and handling are wonderful.

This Tiger pulls strong and true from 2,500 6,000 RPMs and will cruise doing 70 MPH at 2,300 rpm. Tiger ID tags have never been removed and are located under the passenger cowl and above fire wall.

This Tiger needs no club as it's already under the hood. We did say FAST!

The Sunbeam Tiger was a muscle car version of the British Rootes Group's Sunbeam Alpine roadster. Alpine's image in many people's minds was a touring car rather than a sports car, and thus they set out to changing the image, using the recent success of the Shelby Cobra as a guide. Sunbeam asked Carroll Shelby to produce one functional prototype and George Boskoff, a Shelby employee, produced one that was judged to be good enough to send to England for production evaluation. Ken Miles (a talented racer and fabricator) had just been employed by Shelby American and became one of the main contributors to developing the Tiger as well, especially regarding the feasibility of placing a V8 engine in the car. Using his own shop facilities, he managed to install a 260 cu.in. V8 and two-speed automatic into the Alpine in less than a week marking the beginning of what became known as the Sunbeam tiger.