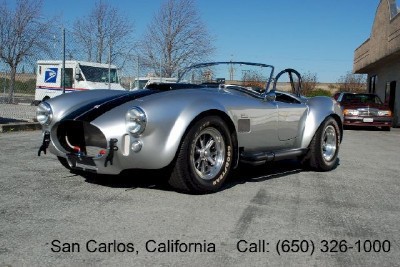 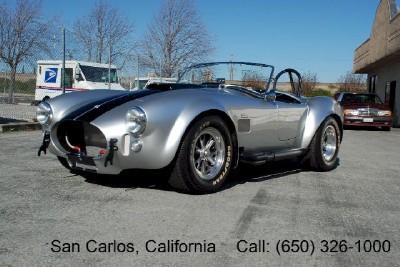 Was that an earthquake we just felt or one of those Superformance Cobras driving by? Was that thunder from above or the Peter Brock endorsed super car firing up? Was that a bolt of lightning that flashed by our eyes, or a 400 plus horse power Shelby blasting down the street. The Superformance Cobra, endorsed by famous race car driver and designer Peter Brock, is a true red, white and blue road pounding brute. This Silver Bullet is a new addition to our showroom, but unfortunately ONLY AVAILABLE FOR SALE OUTSIDE OF CALIFORNIA. .

An amazing 1999 factory built Superformance 1965 AC Cobra Replica with an awe-inspiring 351 Ford Motorsport engine, unleashing over 400 hp! With flawless silver paint and black racing stripes, this AC Cobra screams performance and doesn\'t fail to deliver. With vintage styling and modern construction there is nothing like a Superformance AC Cobra Replica. British sports car styling and American muscle have made this car a dream for many since childhood. It\'s time to make room in the garage because this Cobra is looking for a new home.

Like many British specialist manufacturers in the 1960s, AC Cars had been using a straight six engine that was becoming dated. When AC Cars lost the source for its six-cylinder Bristol engine, Carroll Shelby airmailed a letter and proposal to the company to keep building the chassis for a special Shelby sports car to be powered by an American V8. Ford wanted a car that could compete with the Chevrolet Corvette, and they found it in what became called the Cobra. The Superformance Cobra is an incredible pavement digesting monster and a nice piece of eye candy too. This fantastic machine has very low miles on it and was never driven in rain, having always been garaged. The paint, fit and finish go along with all that is spectacular regarding this great roadster. Carroll Shelby designed the original Cobras with legend Peter Brock. These guys not only knew how to build a great race car but one that drives as good as it sounds. Help yourself to this amazing example of American muscle.