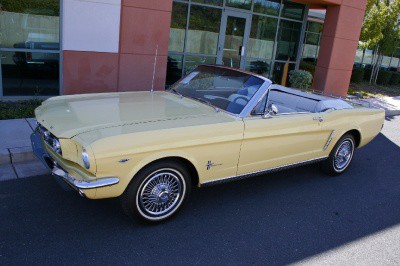 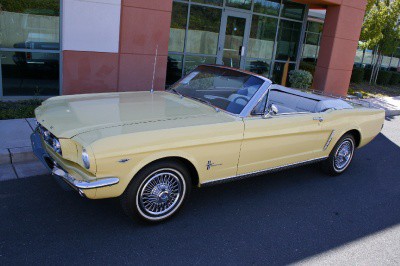 Located in our Benicia, California Showroom 707.748.4000 For our entire inventory, additional pictures and information go to Investment grade 1965 for Mustang convertible. Finished in Sunlight Yellow over White Pony interior. Powered by a 289/2bbl/automatic, was originally an Ivy Green (R code), color, with a black interior. Its options

included a center console, power steering, power top, and automatic transmission. It had an AM radio. During the restoration, removed and replaced the core support, frame support, and right ilmer fender, as well as both front and rear floor pans. Although the body had seen it\'s share of action, only the hood was replaced, with an American reproduction -all other body parts were blasted, repaired and repainted. The \"new\" 5F08C399950 has been retagged, by Marti, with the color code \"V\" in place of the \"R\". \"V\" is the code for Sunlight :is YeHow, a rarely used 1965 color, with a white interior.

The body was stripped and blasted, before being coated with PPG DP-90 Epoxy Primer. The sheet metal repairs were made and then the entire body was reprimed with DP-90, before body work began. After the body work was done, the car was primed, again, with DP-90, followed by PPG filler primers for final block sanding. PPG single-stage urethane was custom matched for the body paint, as Sunlight Yellow was not a regular formula. It is not clear-coated. The interior and trunk were primed and painted, with catalyzed enamel, as well. No trace of the original finish was left. Every component of the car has been redone. The engine and transmission are rebuilds fron1 a 1965 Ranchero; as it was deemed inadvisable to rebuild the originals. All wiring harnesses are new with the exception of the under-dash GT loom and the convertible top circuit. All suspension, brakes, steering, rear end, and other major driveline components have been disassembled and redone or replaced.

The convertible top frame was disassembled and repainted, and the top pump and cylinders are new. The front doors have new hinges, all weather stripping is new. The seat frames were sandblasted, repainted and the new foam and covers were installed. Front and rear bumpers are new reproductions, all other chrome was replated and the stainless was polished. The side glass is original, the windshield is new. The wheels are correct 1965 14\" Ford, with the optional wire wheel covers. The alternator, voltage regulator, starter motor, wiper motor, and heater motor are new. The air-conditioning system has a redone under-dash evaporator with all new compressor, receiver/dryer and condenser from Nostalgic Air, running R-134 refrigerant. The car has been restored to be a driver, with undercoating protecting the repaired floor pan. It has a Pertronix ignition system with a \"Flame Thrower\" high perforn1ance coil. The radiator is a rebuilt 4-core and the heater core is new. It is running on steel-belted radials. The headlights are Sylvania halogen ..