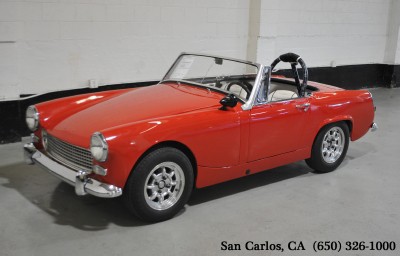 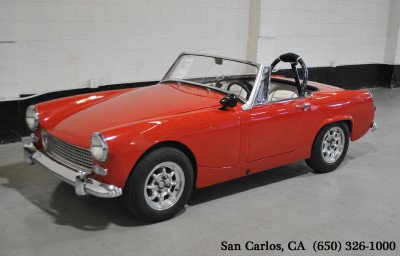 This vehicle is currently in transit. For more information contact us at Sales@SpecialtySales.com.

The Austin-Healey Sprite Mark III was a transition model between the Mark II roadster that preceded it and the Mark IV convertible that followed it. While the Mark III had the roll-up windows of a "convertible," it still had the easily detachable, button-down soft top of a "roadster."Still the same handsome car as its Mark II predecessor, it retained the same 1098 cc engine as the Mark II Series although with three more horsepower at 59. Approximately 25,000 of them were produced.

If you ever get the chance to sample the original Sprite, then a Mark III, you will quickly realize the difference between the two, particularly in the suspension area. In fact, such were the changes made that the Sprite Mark III had a great deal in common with that of the larger MGB. The wider location base for the rear springs allowed B.M.C. to put more rubber into the shackles. This provided quieter running as well as a better ride. Final drive vibration evident on the earlier model was all but gone. The handling was light and predictable, and there was ample elbowroom with two large people on board. These changes helped the Sprite and Midget compete with the then recently-released Triumph Spitfire.

As any Austin Healy enthusiast will tell you that the whole joy in these cars lies in the simplicity and purity of them.This sprite comes to us from its 3rd owner and basically everything is already done for you.All that's left is to enjoy some summer motoring!This would even make a great candidate to enjoy some vintage racing.

Some of the recent maintenance that was done includes a new clutch, new brakes, new tires, new paint(Porsche Guard's Red), and a redone interior.The engine pulls strong and the overall feel of this Sprite is very solid.Give us a call or e-mail to learn more or to schedule visit to our showroom.

Please note that because the amount you offered was below the full Asking Price of $11,990, this offer will be considered but it is NOT guaranteed to be accepted, nor will it take precedence over other offers and you risk losing your opportunity to purchase this vehicle.