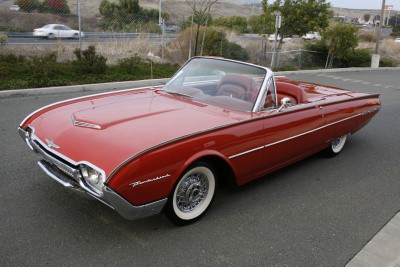 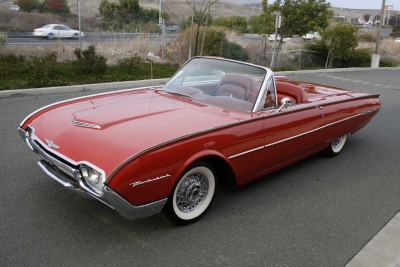 Our Thunderbird features a 390 CIDV8, Automatic Transmission, and the Sports Roadster Package. Located at our Benicia Showroom 707.748.4000. For our entire inventory go to www.specialtysales.com

It underwent some mechanical restoration before it arrived. Upon arrival this is what our service department did:

The Thunderbird ("T-Bird"), is an automobile manufactured by the Ford Motor Company in the United States over eleven model generations from 1955 through 2005. When introduced, it created the market niche eventually known as the personal luxury car.

The Thunderbird was redesigned for 1961 with sleeker styling that gave the car a distinctively bullet-like appearance. A new engine, the 390cuin (6.4L) FE V8, was the standard and only engine initially offered in the Thunderbird. The V8 produced 300horsepower (220 kW) and was mated to a 3-speed automatic transmission. The new Thunderbird was immediately well received with 73,051 sold for 1961. The car was 1961's Indianapolis 500 pace car and was featured prominently in USPresident John F. Kennedy's inaugural parade, probably helped along by the appointment of Ford executive Robert McNamara as Secretary of Defense.

A vinyl-roofed Landau option with simulated S-bars was added to the Thunderbird for 1962 as was a _Sports Roadster _ package for convertible models. The Sports Roadster included 48-spoke Kelsey Hayes-designed wire wheels and a special fiberglass tonneau cover for the rear seats which gave the car the appearance of a two-seat roadster like the original Thunderbird.

Please note that because the amount you offered was below the full Asking Price of $17,990, this offer will be considered but it is NOT guaranteed to be accepted, nor will it take precedence over other offers and you risk losing your opportunity to purchase this vehicle.