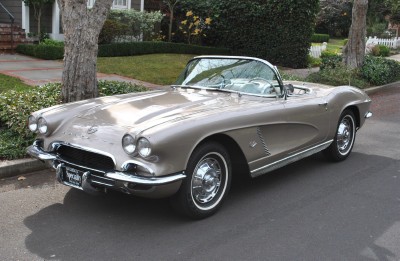 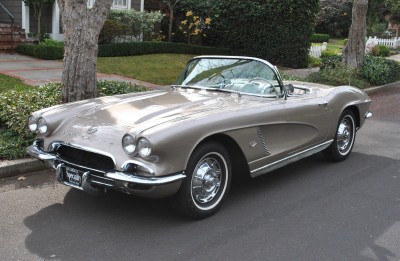 The 1962 Corvette marked the end of an era for America's sports car, with the first completely new model in its history now a mere model year away. Still, the 1962 was a transitional model in that it introduced the venerable 327 V-8, which would be carried over to the new design. While the car harkened back to its roots as a 1953 introduction, thanks to Bill Mitchell, Zora Arkus-Duntov, and company, the 1962 was faster, handled better, looked handsomer, and was more civilized than any previous Corvette, but retained much of the charm of the original roadster concept. Sales on the year jumped by nearly 40 percent to 14,531 units, and the Corvette was firmly in the black as far as GM's bottom line was concerned.

This stunning, Fawn Beige 62 is one of the most solid C1s that we have had in stock for a long time.The current owner has owned it for the last 4 years and over that time has tastefully restored and meticulously cared for it.Some of the items addresses include brand new white canvas soft top, new paint, all new chrome, new brake system and much more. The clock and wonderbar radio both are still in working condition.

According to an appraisal conducted in 2008, all major mechanical items are stock originals including the 327 300 hp motor and 4 speed manual transmission.The appraiser rated all items at above average including paint, fiberglass body, and mechanicals.Our in house Corvette expert has been raving about this car since the day it came in, and for good reason.If you have been looking for an unmolested C1, you owe this car a look.

Please give us a call or email to learn more or schedule a visit to our showroom.

Please note that because the amount you offered was below the full Asking Price of $59,995, this offer will be considered but it is NOT guaranteed to be accepted, nor will it take precedence over other offers and you risk losing your opportunity to purchase this vehicle.