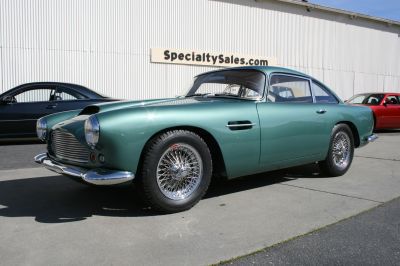 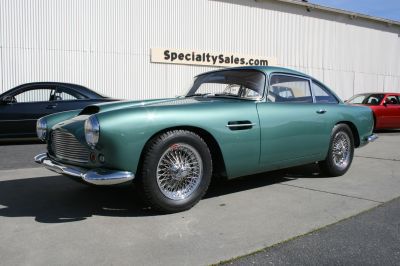 Beautiful and straight early DB4 in rare Green Metallic over Tan Leather. Brightwork and chrome without anything but minor indications of use. Dash, instruments, and interior accessories as crisp as the outside.

At its introduction, the Aston Martin DB4 was the star of the 1958 London Motor show, and was the car that put Aston Martin back at the forefront of Europe's finest touring manufacturers. The design for the DB4 started in 1954, and it was the successor to the very popular DB Mark III. The perennial design and quintessential line of the DB series of cars carried Aston Martin into the late 60's with the final incarnation the DB6.

One can clearly see the Italian design and construction influences throughout the vehicle, most notably in the front and rear light ensembles. Additionally, the DB4's lightweight design and flowing lines can be attributed to its tube-framed body structure, named "Superleggera," which was designed by Carrozzeria Touring out of Milan. Despite its Italian influences, the DB4 was the first car to be produced at Aston Martin's Newport Pagnell plant.

The DB4's aluminum DOHC straight six and 4 speed transmission was designed to produce 242 hp and gave the car a top speed of 140 mph. Notably, this was the first car capable of going from 0-100-0 under 30 seconds (27.4), with a fair amount of credit going to the Dunlop 4-wheel disk brakes. The DB4's is truly a connoisseur's car, and with the resurgence of the mark to current premium status, these highly coveted "Gentleman's Express" offers the style, sophistication and panache instantly recognized by fellow astute aficionados.

Please note that because the amount you offered was below the full Asking Price of $239,990, this offer will be considered but it is NOT guaranteed to be accepted, nor will it take precedence over other offers and you risk losing your opportunity to purchase this vehicle.