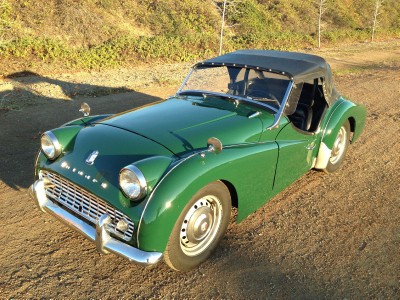 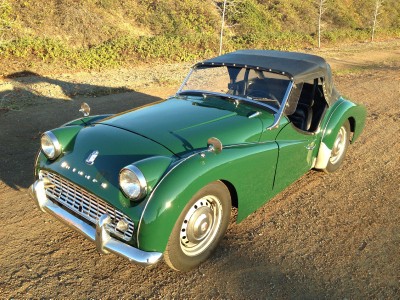 In 1957 the Triumph TR3A was introduced as a replacement for its predecessor, the TR3. The 3A featured improved design and mechanics, resulting in a top speed of 105 mph. The TR3A was a reliable vehicle; this was proven in 1960 during the grueling Le Mans 24 Hour race where three cars were entered and finished, placing ninth, eleventh and fifteenth.

The vehicle featured a four-cylinder, 95 horsepower engine. With an overall weight of the vehicle tipping the scale at 2200 pounds, meaning horsepower to weight ratio was excellent. To this day, the car remains competitive in SCCA and vintage racing.

If there ever was a car deserving of a British Racing Green paintjob, this stunning, 2-owner TR3A is it. By far, one of the most solid TR3s we have had in a long time. The current owner has had it for the last ten years and it has been in his family for the last 30! In addition to the great paint, the top and tonneau cover are brand new.The car drives great and you can really feel why these cars made such a splash back in the day.

If you have been looking turn-key TR3A, then you have finally found it.This is one you can begin enjoying the day you buy it and for many years to come.Please give us a call or email to learn more or schedule and appointment.

Please note that because the amount you offered was below the full Asking Price of $19,995, this offer will be considered but it is NOT guaranteed to be accepted, nor will it take precedence over other offers and you risk losing your opportunity to purchase this vehicle.