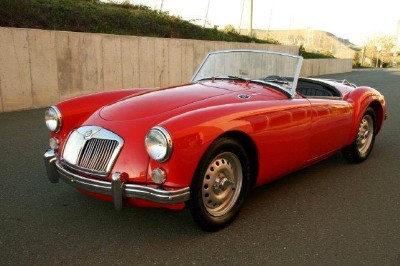 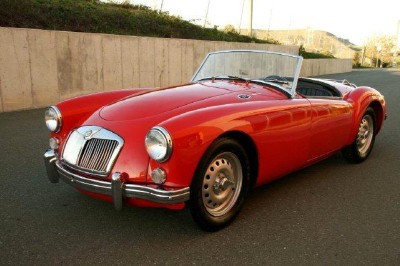 This MG-A is one of 2,111 Twin-Cam models produced! It is a rust-free car that was originally sold in Texas and has been properly stored since 1984, following a minor cosmetic restoration, including paint and interior, and upgraded (later model)tail lights and parking lights. The mileage (54,112)is believed to correct, based on the remarkable condition of the original windshield. The MGA is a sports car produced by MG division of the British Motor Corporation from 1955 to 1962. It is a an extremely rare model. Located at our Benicia Showroom 707.748.4000. For our entire inventory go to www.specialtysales.com

The MGA replaced the older T-type cars and represented a complete styling break from the older vehicles. The car was officially launched at the Frankfurt Motor Show of 1955. It was replaced by the MGB when production ceased in July 1962. Through that time, BMC sold 101,081 units, the vast majority of which were exported with only 5869 cars sold on the home market, the highest export percentage of any British car.

Falling sales of the traditional MG models caused a change of mind and the car, initially to be called the UA-series, was brought back. As it was so different from the older MG models it was called the MGA, the "first of a new line" to quote the contemporary advertising.

It was a body-on-frame design and used the straight-4 "B series" engine from the MG Magnette saloon driving the rear wheels through a 4 speed gearbox. Suspension was independent with coil springs and wishbones at the front and a rigid axle with semi-elliptic springs at the rear. Steering was by rack and pinion and was not power assisted. The car was available with either wire spoked or steel disc road wheels.

Please note that because the amount you offered was below the full Asking Price of $39,995, this offer will be considered but it is NOT guaranteed to be accepted, nor will it take precedence over other offers and you risk losing your opportunity to purchase this vehicle.