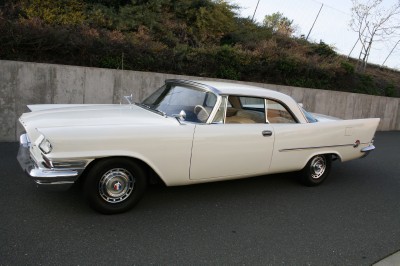 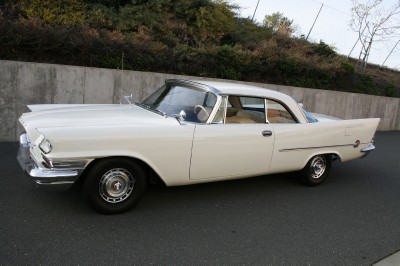 Located at our Benicia, CA Showroom 707.748.4000 This car was built on 5-25-57 in California and shipped to Brewer Motor & Equipment Co. Dealer # 5428 on June 4, 1957 in Auburn, Washington. It was found in Eastern Washington in 1993. The car was restored to its current condition in December of 2007. With 89000 miles currently, here is the description of this fantastic driver. Original everything in Cloud white body # 24986 and engine # 3N572507. Includes Power Steering, Power Brakes, Power Windows, Rear Shelf Defroster, Heater, Defogger, Rear Windows, Power Front Seat, Solex Glass (all windows), Outside Mirror- Left, Antenna Manual, Radio - Electro Touch Tuner. Additions during restoration: Radio-rebuilt as original with addition of AMFM- Stereo and input for Hiway Hi-Fi and MP-3; Dash Clock was replaced with a Bemus clock; self winding steering wheel hub and in its place a Tachometer was installed in the Center instrument Bezel where the clock had been. The engine and Transmission were rebuilt at the end of the restoration with approximately 2000 miles on them. All mechanicals were restored or remanufactured, and new old stock suspension components, such as Torsion Bars and Leaf Springs, were replaced. All rust issues have been addressed and repaired, and the car was painted the original Cloud White. The wheels were replaced with 15-inch steel wheels and radial tires, and later 300 hub caps. The car was completed with the concept of a high level driver and not for show. There are some patina or blemishes, making this a level 2.6 for appraisal purposes. The original concept was as an entrant in the Mexican Road Race, so reliability, drivability and security was # 1. Due to its rarity, it was decided not to race-modify the car by adding a roll cage, race seats, associated engine components, and race paraphernalia, but rather to maintain its originality. The tachometer, in my estimation, was a "shouldhave- been" addition and enhances the car's heritage as a "doctors muscle car." Invoices totaling over $63,000 to bring this car to its present state. Values for this car vary from $75,000 to $55,000 in similar condition and unique circumstances (not even considering the additions and extras). Included are copies of all documents build sheet and 300 Club certification.