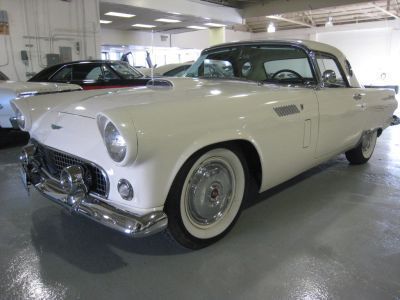 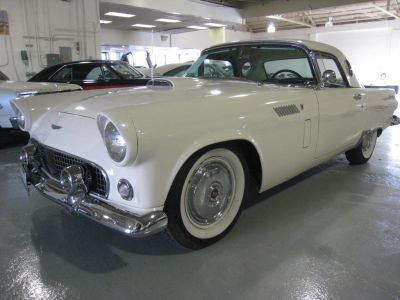 This vehicle is displayed in our San Carlos California Showroom (650) 326-1000. For the entire inventory, additional pictures and information, go to www.specialtysales.com

Here is one of the most famous style driven machines to come out of Michigan. The 1956 Thunderbird. Do you remember Suzanne Summers in the T-Bird in American Graffiti? This car has updated front disc brakes, the factory padded dashboard, rebuilt carburetor, hardened valve seats, new fuel pump, wide white wall tires, both hard and soft tops, new carpet kit and even some spare parts included. Solid driver with great sound and pizzazz. Here is some history regarding this fantastic BIRD.

The car originated from the Dearborn Mich. assembly plant to Weatherford Oak. on June 5,1956.
We have the original dealer invoice on the car from when it was first sold. Previous owners had it stored in a garage in the winter and that it was only driven when the weather was nice. They had the heads on the motor changed to hardened valve seats for unleaded fuel.

When the current owner bought the car in March of 1998 it was driven from Vancouver Canada to Fremont CA with no problems during the trip whatsoever. The first couple years the car was used as a daily driver going to car shows / swap meets looking for things to improve the car to keep it original. The car ended up being stored in the garage for about 6 years while the interior was being re-finished along with the front disc brakes, new rear brakes. The front sway bar was installed and new wide-whitewall radial tires were put on. The engine would be run periodically. In late 2007 it was decided to continue on the finial part of getting the car road ready. The brakes made a great improvement in safety and stopping power. In the next few months time was spent fixing various leaks that were caused from the car sitting and not being driven. The Transmission had fluid, filter and rear seal changed. The rear main seal was upgraded to a neoprene seal along with a new crankshaft bearing cap to match the new seal.

This Thunderbird is all tuned up and ready to fly.

Please note that because the amount you offered was below the full Asking Price of $34,900, this offer will be considered but it is NOT guaranteed to be accepted, nor will it take precedence over other offers and you risk losing your opportunity to purchase this vehicle.