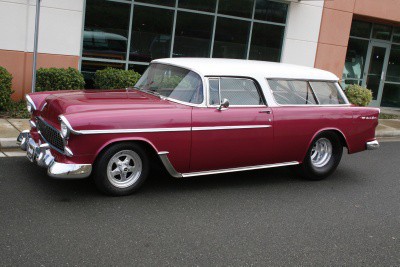 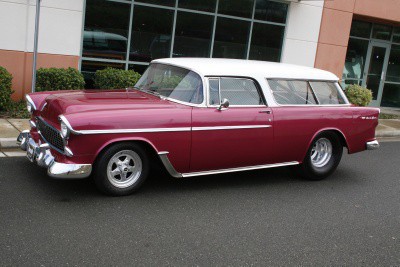 This vehicle was restored and then never driven while in storage. It features a 502 CID GMCrate Motor with Billet "bling" upgrades, a Turbo 400 transmission with electronic down shift as well as 4-wheel power disc brakes. Nomads are not widly available and this is one not to miss out on! It comes with 3 binders worth of receipts and records documenting the restoration. Located at our Benicia Showroom 707.748.4000. For our entire inventory go to www.specialtysales.com

The Chevrolet Nomad was a station wagon model made off and on from 1955 to 1972, produced by the Chevrolet Division of General Motors. The Nomad is best remembered in its two-door 1955-57 form, and was considered a halo model during its three-year production as a two-door station wagon.

The two-door Nomad differed from other station wagons of the era by having unique styling more reminiscent of a hardtop sedan than that of a standard station wagon. The Nomad's unique design had its roots in a General Motors Motorama show car of the same name that was based on the Corvette. The Concept was introduced at the GM Motorama in 1954 as one of Head Stylist, Harley Earl's "dream cars". GM approved production of the vehicle if the design could be transferred to its standard model, because top GM brass felt that they could sell more models if it were attached to the popular Bel Air model.