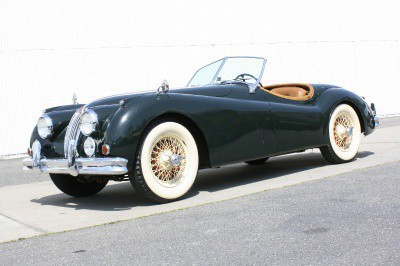 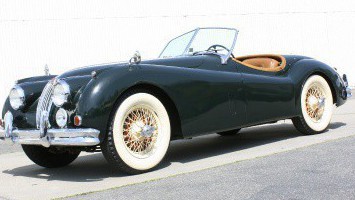 We are pleased to offer this solid '55 Jaguar XK140 OTS Roadster finished in classic British Racing Green over Natural Tan leather interior with Green carpets, Beige soft top and side curtains, powered by its original numbers matching 3442cc DOHC I6, 4 speed manual transmission, dual exhaust, wire wheels and wide whitewall bias-ply tires. This XK140 is an unrestored, unmolested survivor and does show its age.The paint is less than perfect and is cracking in some areas, most notably on the rear trunk lid but overall it shows well and could be considered a solid "driver". For the most part the interior is in good condition with no rips or tears although the carpeting, albeit in decent condition, is faded in most areas. The Beige canvas soft top is in similar condition as the rest of the car, complete, but showing age. All of the hardware is there and complete. The soft top frame is in good condition and operates as it should. The Beige canvas side curtains are complete and in good condition showing no rips or tears. The glass is also in good condition. Overall this XK140 is a complete and original solid driver car that starts right up and drives great.Having only produced approximately 3,350XK140 Roadsters between 1954-1957, most of these have either been restored to 6-figure show quality cars and are "too nice" to driveor are rotted beyond repair.

_The Jaguar XK140 is a sports car manufactured by Jaguar between 1954 and 1957, the successor to Jaguar's highly successful XK120. Upgrades included better brakes, rack and pinion steering, increased suspension travel and modern tube type shock absorbers instead of the older lever arm design.

The XK140 was introduced in late 1954 and sold as a 1955 model. The primary visual change was the more substantial front and rear bumpers, with large overriders. Another new feature was modern flashing turn signals, operated by a separate switch on the dash. The twin amber lights positioned above the front bumper helped to distinguish the XK140 - until XK120 owners started installing the same equipment.

Front grille size stayed the same but became a one piece cast unit with fewer, thicker vertical slats. The Jaguar badge was fitted to the grille itself, rather than being mounted between the grille and hood/bonnet as on the XK-120. A chrome trim strip extended back over the bonnet and at the rear continued down the centre of the boot (trunk) lid, where it contained a red shield with the words 'Winner Le Mans 1951-3' inscribed in gold.

The interior was improved for taller drivers with an addition of 3 inches (76 mm) of legroom, as a result of relocating the engine, firewall and dash forward. The new arrangement left no room for the XK120 battery compartment, and the single battery was now located low down inside the wing on the inlet side, making it almost impossible to replace._

Please note that because the amount you offered was below the full Asking Price of $67,990, this offer will be considered but it is NOT guaranteed to be accepted, nor will it take precedence over other offers and you risk losing your opportunity to purchase this vehicle.