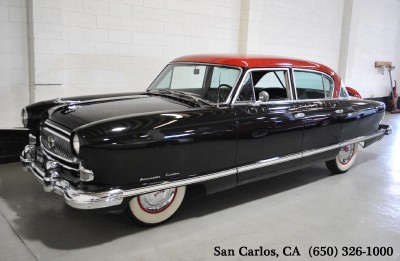 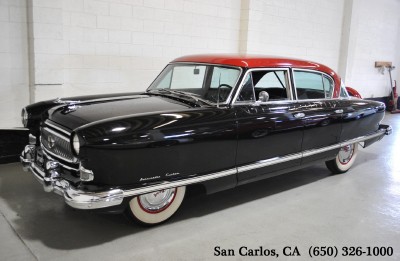 Nash Motors' first use of the name Ambassador was during the 1927 model year when a specially trimmed four-door, five-passenger club sedan version of the "Nash Advanced Six" (designated model 267) was developed. As the most expensive car in the line, the Ambassador received premium upgrades in upholstery and other trim items for a base price of US$2,090 (FOB). The Ambassador model lost its position as Nash's most expensive car in 1929 with the introduction of seven-passenger sedan and limousine models that were carried through the 1934 model year.

By 1954 the Ambassador had a restyle though the basic style was there from 1952 along with the famous enclosed wheels. Sitting on a 121.25 inch wheel base, the Ambassador was 78 inches wide, and 209.25 inches long (yes, 17.44 feet!) making the Ambassador a huge car by any standards. Styling details on the 1954 Ambassador included a notch cut finish along the upper outer door just below the window sash line. Wrap around rear windscreens had a panoramic like view.

Renowned design house Pininfarina provided assistance for the timeless design as made evident by the famous logo on the C-pillars. Chrome was used tastefully, with window surrounds getting the majority of the chrome additions. Emblems on the front fender stated the Ambassador Custom name, and available two tone paint gave the body shape distinction. The enclosed wheels allowed for a lovely lower side molding to run from stem to stern on the car (if you will excuse my nautical analogy, but is as big as a boat), emphasizing the low look the enclosed wheels offered.

Power for the car came from a base engine 252.6 cid straight six, making 130 HP. A 3 speed manual transmission was standard with a GM-sourced Hydromatic being an option.This particular Ambassador comes to us from a local collector. He purchased it 10 years ago in Southern CA from another collector. This is definitely a clean and solid driver which has the potential to be brought up to a #2 with a small investment. Everything is intact and the red and black two-tone interior perfectly matches the exterior.

Standing next to this unique car in person you will be charmed by its interesting lines and design scheme. Picture yourself in a dealership back in 1954 and imagine how sleek and modern this must have looked at the time when compared to similar cars of the era.

If this black on red gem has caught your eye, you owe it to yourself to give us a call and schedule a visit to our San Carlos showroom to take a closer look.

Please note that because the amount you offered was below the full Asking Price of $16,995, this offer will be considered but it is NOT guaranteed to be accepted, nor will it take precedence over other offers and you risk losing your opportunity to purchase this vehicle.