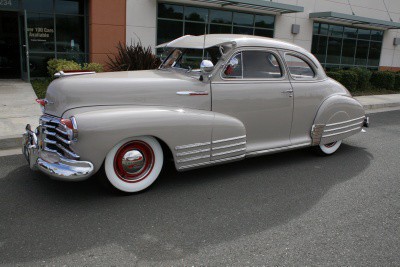 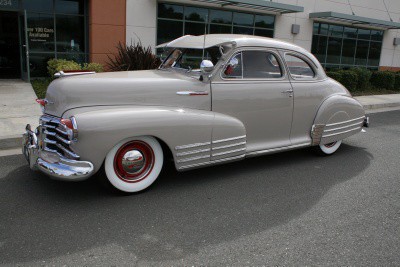 This car has been restored from the ground up during a frame-on restoration. During the restoration it received new rubber, glass, chrome and the wood grain was restored. Located at our Benicia Showroom 707.748.4000. For our entire inventory go to www.specialtysales.com

Considered to be a very handsome vehicle, the Chevy Fleetmaster was introduced in the middle of 1941. One of the lowest quantities manufactured of any Chevy vehicles of all time, the Fleetmaster was a beautiful and very rare streetrod. Basically prewar designs, the Chevy Fleetline was in great demand and was a very popular seller.

On October 3, 1945 the Fleetmaster first rolled off the assembly line in very small numbers. At the time there was a shortage of critical materals, mostly sheet steel. Unfortunately a United Auto Works strike was called on November 21rst and production was unable to resume at a normal pace. The assembly lines halted completely and weren't resumed until March 13, 1946 when the strike was settled. Chevrolet became the first GM division to resume production on March 29th.

The 1946, '47 and '48 Chevy models were basically warmed over' versions of the 1942 models. This was following four years with no civilian passenger vehicles being produced. Chevrolet chose to serve up existing models, much like its competitors. The demand for new vehicles was extreme, and the paid-for factory tooling was already in place. The Master DeLuxe became the Stylemaster while the Special DeLuxe was rebadged as the Fleetmaster. The Fleetline morphed into the Fleetmaster subseries. There was no business coupe in the Fleetmaster lineup, but other than that, the body type remained the same.

Featuring low, wide grillwork and headlights the 1942 Chevy Fleetmaster was basically the same as the final prewar series with only a few significant mechanical distinctions. In 1947 the grille and beltline molding were further advanced, and at this time the Fleetline Aerosedan was once again Chevy's volume leader, surpassing the 1946 Stylemaster Sport Sedan. The headlights smoothly blended into front that meshed into the doors much like Buick's style.