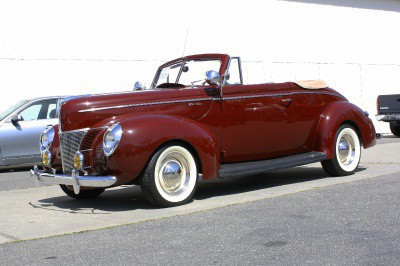 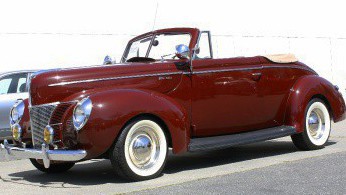 Designed by Bob Gregorie under Edsel Ford's watchful eye, the 1940 Ford Deluxe was a styling success and remains an enduring American classic. The 1940 Fords introduced several new features and one of the most distinctive designs of the prewar era. A significant technical change included moving the gearshift from the floor to the steering column, a modern feature that was not only more convenient for the driver but also increased front seat legroom for passengers. Ford also introduced sealed beam headlights in 1940, finally eliminating the persistent problem of moisture degrading the reflectivity of headlights, which relied on separate bulbs. Stylistically, the single-element V-shaped grille of 1939 was broadened for better cooling with separate grille elements located on each side of the center grille, a sharp and distinctive visual identification feature. In the interior, the wood-grained dashboards that Ford had used for years were replaced by a modern dashboard in maroon and beige plastic that employed rectangular forms for the instrument panel as well as the radio and large speaker, which were now a common feature. Bob Gregories two-spoke steering wheel, which had earned high praise and acceptance in the 1939 Mercury, now found its way into the Ford as well, which blended perfectly with the new dashboard design.

The 1940 Ford Deluxe Convertible presented here with its striking Maroon finish over its Dark Brown interior and Tan convertible top appears to have been treated to a recent restoration with great attention to detail and remarkable workmanship. Save for a few nicks, scratches, and imperfections visible upon much closer examination, the paintwork and chrome are highly presentable and seem indicative of slightly older restoration and appropriate aging. The interior is new; the upholstery, door panels, and carpeting are all in excellent condition, as are the dash and instrumentation. Retaining its original driveline, every element under this cars hood appears to be correct with proper and correct details. While the engine compartment is certainly not show quality and does show small signs of paint loss and oxidation, it was detailed some time ago and is indicative of a very drivable, presentable automobile. Similarly, the undercarriage is unrestored but the lack of pitting or corrosion lends credence to the cars dry weather, rust-free history. Equipped with such features as dual mirrors, fog lamps, wide whitewall tires, an interior clock and radio; this 1940 Ford is a very respectable and drivable Convertible that benefits from an older restoration. Its performance is satisfying and highway capable while its style has stood the test of time. Handsome, modern, and comfortable, it continues to be enthusiastically sought-after by marquee enthusiasts and bona fide collectors.