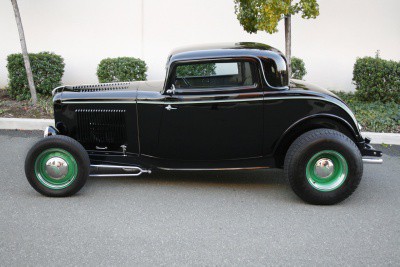 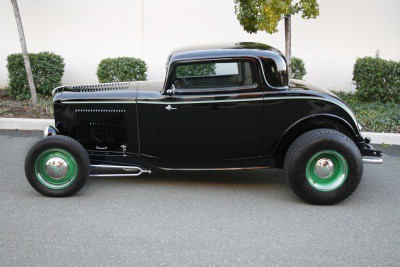 The Model B was a Ford automobile with production starting with model year 1932 and ending with 1934. It was a much updated version of the Model A. Model B Fords came in a large variety of body styles: two-door roadster, two-door cabriolet, four-door phaeton, two-door and four-door sedans, four-door 'woodie" station wagon, two-door Victoria, two-door convertible sedan, Panel and sedan deliveries, five-window coupe, a sport coupe (stationary softtop) and the version of our car, the three-window Deluxe Coupe. Prices ranged from US$460 for the roadster and the coupe's $490 to the $650 convertible sedan. Nowadays, the roadster and coupe are the most sought after, as these body styles are popular for streetrods and intact examples have become rare.

During the WWII period the Model Bs and V8s were frequently altered into hot rods. This continued into the 1960s on a large scale, being noted in popular media of that time via the hit song, Little Deuce Coupe.

In the 1940s, the '32 Ford became an ideal hot rod. Hot rodders would strip weight off this readily available car and soup up the engine. They came in two body styles, the more common "5-window" (two door windows, two quarter panel windows, and the rear window), and the rarer "3-window" De Luxe Coupe that featured rear-hinged suicide doors.